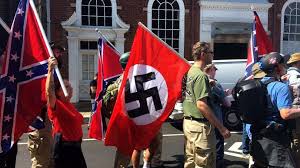 This relates to the white supremacist gathering in Charlottesville on Aug. 11-12 that erupted into violence, leaving one woman murdered and two police officers dead. Trump’s contribution to this tragic affair was his reprehensible public display of divisive leadership. Even for Trump this reached a new low, and edged him closer to being forcefully removed from office.

A new poll indicates 4 in 10 Americans now support the impeachment of President Trump, a 10 point jump in the last six months, according to the Public Religion Research Institute. For those not psyched by polls, or who find them subjective, give a look to professional gamblers. When in doubt, those who make a living off predicting winners and losers are an excellent barometer for which way the wind blows. Oddsmakers at Ladbrokes are giving Trump a 48 percent chance of not finishing his first term due to either impeachment or resignation. 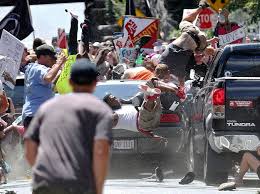 Tensions flared in Charlottesville Saturday after a torch-lit march through the campus of the University of Virginia by neo-Nazis, white power, and white nationalist supporters the night before. Heather Heyer, 32, was killed and at least 19 people were injured when a car plowed into a crowd of counter protesters gathered to oppose a “Unite the Right” rally of white nationalists and other right-wing hate groups. About three hours later a Virginia State Police helicopter that was assisting with police surveillance crashed near the scene. The two officers onboard were killed.

Trump gave a slippery condemnation that came too late and required numerous redirects from his staff, allowing for planned wiggle room for the president’s KKK and white power buddies. They helped get him elected and are part of his fragile popularity base that sits below 35 percent approval. He can’t come down too hard on these hate groups or they will desert his meager base.

After a vague tweet issued by Trump later Saturday, David Duke, the former Ku Klux Klan imperial wizard issued the following response via Twitter, “I would recommend you take a good look in the mirror & remember it was White Americans who put you in the presidency, not radical leftists.”

The cover story for this vicious gathering was a protest over the planned removal of a statue of Confederate Gen. Robert E. Lee. As the violence roiled armed militia stood their ground on the park’s periphery in menacing fashion. Virginia is an open-carry state. It’s common to see civilians strapped with handguns, but to see military-style assault weapons, like an AR-15, slung over shoulders of grimacing hatemongers sporting pro-Nazi insignias sent a chilling message.

I continue to question why law enforcement didn’t assert themselves on Friday to prevent that disturbing march through UVA’s campus, or prior to the violence erupting Saturday. There is no room for malicious hate groups to be marching through a bastion of learning with chants of “Jews will not replace us,” or “blood and soil,” a key slogan of Nazi ideology that is intertwined with racist and anti-Semitic ideas.

Words such as those are violent. The imagery before any physical confrontation from Friday and Saturday was violent. The raw hatred, seething from these white nationalist marchers Friday evening was evident and threatening, especially on a college campus. Considering the visuals from Friday, it’s beyond me how law enforcement didn’t prepare to make a forceful presence Saturday, and communicate to organizers that any violence would not be tolerated.

It was estimated some 500 white nationalist protesters were in the park Saturday when police declared the gathering an “unlawful assembly” at 11:40 a.m., about 20 minutes before the rally was about to begin. Most of the conflict came as white nationalists and anti-fascist groups crossed paths making their way to the park where the Lee statue is located. 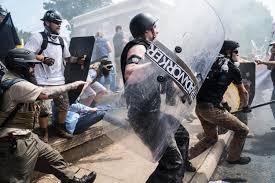 The ensuing melee was not something often seen in America, as both sides came equipped with riot gear. Numerous protesters wore tactical vests, helmets, and were grasping clubs, bats, and plastic shields. Both sides came prepared with canisters of pepper spray, other chemical agents, or threw bottles filled with urine.

The raw anger on display and emboldened attitude of self-righteousness from these white power pukes offered a similar vibe fostered at Trump’s campaign rallies seen throughout 2015-2016. It gave off the impression this sentiment of nativism and white power has a solid foothold in America.

With Trump’s tepid statement of condemnation, and vile double speak about how bad people were on both sides of this clash, this evil was given the air required to survive and thrive. The event and response had all the hallmarks of a Steve Bannon/Stephen Miller production. Here was the White House offering light to Nazis and the KKK for them to step out from the shadows, with a big wink from Trump to David Duke, who was in attendance.

Nice to see Donald Trump and his creepy advisors are really rising to the occasion of being presidential and broadening his message of inclusion to the nation. Who knew we needed to make room in the tent for the Klan.

I must say those red “Make America Great Again” hats sure did look smart atop all those white power boys’ heads, and blended lovely with their black swastikas. The White House must be proud.