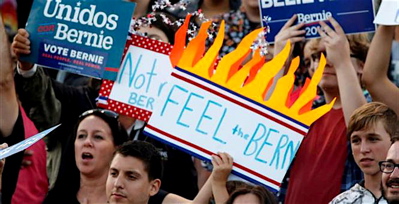 Is Hillary “Feelin’ the Bern” after winning close in Kentucky and losing large to Sanders in Oregon.

It took most of the night to be decided, but Hillary Clinton was declared the narrow winner of the Kentucky Democratic Primary Tuesday. The lead swung back to Vermont Senator Bernie Sanders late, as eastern and western Kentucky penalized Clinton for her anti-coal statements. It was Jefferson County, where Louisville is located and the majority of the state’s African-American population, that came in strong for Clinton, pushing her back into the lead to finish the night victorious.

These results increased the turbulence being felt on the Democratic side of the presidential nominating process. Clinton has a commanding lead in allocated delegates, 1,764 to 1,490. Even being extremely kind in looking at outcomes in the remaining states, the path is nearly impossible to navigate for Sanders to make up the deficit.

Yet Bernie spoke at a rally in California last night before more than 11,000 supporters. Through vociferous cheering, impassioned sign-waving and unflinching enthusiasm, his drive to stay in the race was resolute.

The math may be with Clinton in terms of winning the nomination, but Sanders, like Donald Trump, has captured the sour mood of the country. Clinton can’t draw the kind of crowds Sanders or Trump pull, nor does she generate the energy from her supporters these other candidates are eliciting.

Much of that may be explained by her demographics encompassing more of the 40 and above crowd. Many of these folks went to college, work and have family and professional obligations. They don’t have time to attend political events on a weeknight. But they will vote Hillary.

It makes one wonder how the Democratic Party is going to mend its fences and unify behind the eventual nominee, as now there are riffs down racial, income, education and age demographics.

Like Trump on the Republican side, Sanders has a base appeal within a discontented portion of his party that may not play so well in a general election.

But a new poll out of New Hampshire shows Bernie up 54-38 against Trump, while Clinton only leads Trump 44-42. Sanders currently is outpolling Clinton in every state against Trump.

Beyond Clinton’s baggage and believability issues, it’s her continued lack of a concise message for why she is running that brings a sense of apathy surrounding her campaign.

Trump claims he will “Make America Great Again.” That’s a powerful sentiment that resonates in times of economic instability. Likewise, Sanders’s identity is tied to the message of the economic system being rigged against the little guy. That too appeals to an angry electorate.

Clinton can list numerous issues needing improvement in terms of why she is running, but it’s never smooth, and there continues to be churn surrounding her on Benghazi and the use of her personal e-mail server.

Admittedly, 2016 isn’t a normal year. Many of the norms and customs for candidates and campaigns have been cast by the wayside. If this truly is a “throw the bums out” year, Hillary could have trouble, but she at least has a core base of support. After being politically active for decades she has a solid record and lots of friends.

Yes, enemies too. But once she is pitted against Trump alone, the devotion and passion likely will follow from establishment Democrats down to moms and pops across America.

Trump has few that actually support him on substance or character.

It’s all about negativity with The Donald. His candidacy is based upon voting against progress and change by casting a ballot for him. That is different from supporting him on his own merits.

It’s a regressive idea to return to a time when white men ran the show without question. I was never a big fan of George W. Bush’s administration, but as an individual, W was a stand-up guy, compassionate and respected strong female role models, such as his mother. He is light years beyond a better human being than Donald Trump.

This may end up being a tight election, but the electoral map favors the Democrat heavily.

If the comments and intended policies by Trump concerning immigrants, Mexicans, Muslims, women, and African-Americans are considered, and how those voting blocks will probably respond in battleground states, it would lead a skilled better to wage that Hillary Clinton will win a similar number of electoral votes as President Obama did in 2012.

A forecast by Larry Sabato of the University of Virginia sees no toss up states this time around and favors Clinton 347 electoral votes to 191 for Trump. OUCH!

The Rothenberg & Gonzales Political Report offers a more conservative estimate, but still grim: 263 leaning or solid for Dems, 206 for R’s and the remaining a toss up.

This possibility has Republicans running for down ballot offices concerned about a disaster at the top trickling down to the entire party. Or will this election ultimately be a referendum on the status quo and Trump is swept into office?

Stay tuned, as these candidates look prepared to exchange political body blows throughout the summer. It’s going to be bloody, but outstanding to watch.