Seven Deadly Sins Found in the Streets of New Orleans 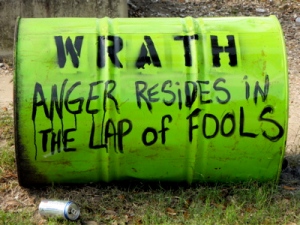 As the New Orleans Jazz & Heritage Festival came to a soggy close Sunday, I was jealous when I opened Twitter to see a post from Ivan Neville’s band Dumpstaphunk that they had a late night show kicking at Tipitina’s Sunday night.

That is a coveted gig, and one that always is a raucous affair lasting deep into the AM hours. Jazz Fest is a long pull for music-crazed locals that begins on the Wednesday before Fest with a free performance in Lafayette Square, and basically continues through two weeks of music-filled days and nights in town and at the fairgrounds until the Sunday of the first weekend in May.

Often it’s the Tipitina’s show that serves as the unofficial sayonara for each year’s fest. Situated at the corner of Tchoupitoulas and Napoleon, Jazz Fest loyalists gather there on the final Sunday even if they don’t have tickets, just to hangout in the street with other festival revelers and keep the party going in a friendly atmosphere. 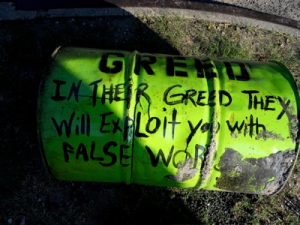 It’s surrounding this scene that made me recall some brilliant street art residing at the far end of the block from Tip’s. Appearing out of nowhere on a random visit in the grass by the corner was an industrial sized 55 gallon steel barrel, painted a disturbing shade of nuclear toxic waste green, and emblazoned with “WRATH” in stenciled black letters. Written below it in freehand black paint was the message, “Anger Resides in The Lap of Fools.”

Trails of black paint ran from the free-handed message, like toxins leaching from their inappropriate storage container. It was cool and disturbing at the same time.

In the context of New Orleans continuing to deal with its recovery after Hurricane Katrina and the BP oil spill putting another corporate hit on the seafood and hospitality community, it seemed dark forces were conspiring to keep the Crescent City low. With all the condemned buildings, city blocks and in some cases entire neighborhoods vanquished, graffiti-based statements expressing civic anger and political opinions were sprouting up across the city. 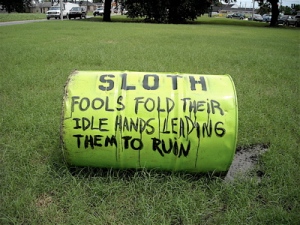 This example was obviously more constructed. The creativity can be debated, but it did get across a convincing point. As it turned out this was only one of seven strategically placed barrels on public lands around the city representing the seven deadly sins.

These illicit pieces of street sculpture were the work of renegade artist Rox Steady. As a whole this installation ended up serving as a powerful statement about the ills New Orleans and southern Louisiana suffered as a result of the willful neglect by President George W. Bush, the government and from the abuse committed by corporate entities.

Each of the seven pieces had its own rumor mill behind it of where it was located. Many times I would accidentally stumble upon one of the barrels (or sins) in the midst of night-crawling to a restaurant or club. The barrels were conversation pieces and certainly presented photo opportunities.

I was particularly fond of the barrel by Tip’s. A couple blocks down from the club at the corner of Magazine and Napoleon resided the quintessential cocktail club, Ms. Mae’s. It serves notoriously cheap booze, and is a mandatory stop before or after a Tip’s show. It also happens to be open 24/7 and at any given moment usually has several deadly sins on display inside.

Passing this glowing green barrel with WRATH screaming from the side was always good to make one think twice about what they were about to perpetrate and the consequences, for repercussions in the Big Easy can be epic. And you definitely don’t want to end up on Club Ms. Mae’s “Wall of Shame.”