Posted on February 12, 2016 by theurbanllama 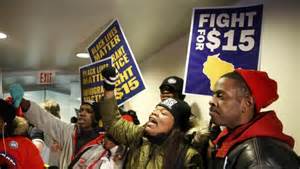 The Democrats convened in Milwaukee, WI last night for the PBS NewsHour Debate. Hillary Clinton and Bernie Sanders sharpened their tones toward one another, with more pointed attacks on their records in an attempt to force contrasts between the two candidates.

The arguments in the debate were largely shaped by two events occurring earlier in the day.

One was a response Sanders gave in an interview where he described how there is a huge gap between Congress and the American people that requires presidential leadership to close.

When asked had President Obama succeeded in closing that gap, Sanders responded, “No.”

The Clinton campaign seized upon this response regarding political polarization and obstructionism that is currently plaguing America’s entire political system, and mischaracterized it during the debate into Sanders supposedly criticizing Obama’s leadership.

The other event impacting last evening’s debate was the endorsement of Clinton by the Congressional Black Congress.

There is a furious competition brewing to determine who has the background and track record that best demonstrates support for the African-American community, and to secure its vote.

Hillary clung to the president throughout the debate, like she was falling out of an airplane and Obama was the last parachute.

Sanders instead focused on his message of income inequality, big Wall Street banks and the vision required to make tough decisions as president.

It’s interesting because Clinton can explain why she voted for the Iraq War and accepted $675,000 for speeches delivered to Wall Street executives, but she can’t escape it calling into question her vision and judgment.

As Sanders pointed out last night, Wall Street, drug companies and the fossil fuel industry don’t give massive contributions, like they have to Clinton, for no reason. They expect a return on their investment.

For Clinton to assert that taking this money doesn’t impact her objectivity is disingenuous.

She can talk about Dodd/Frank being passed, but not one Wall Street executive was prosecuted for their roles in causing the 2009 recession. Instead the banks were bailed out by taxpayers and allowed to use their massive wealth to pay fines instead of facing criminal charges.

Clinton likes to insinuate that Sanders is a single-issue candidate, but the greed exemplified on Wall Street is legitimately at the core of a host of issues plaguing America.

By Sanders choosing not to have a super pac or accept Wall Street money it eliminates any question of possible preferential treatment under a Sanders administration, and gives him an authenticity that isn’t available to Clinton.

Meanwhile, the Washington Post reported the State Department’s Inspector General issued a subpoena to the Clinton Foundation last fall seeking documentation regarding the charity’s projects that may have required approval from the federal government while Hillary Clinton was serving as secretary of state.

These are investigations coming from Democratically controlled organizations – not Republicans.

For voters listing “honest and trustworthiness” in their top criteria for selecting a candidate, Clinton is fast becoming a difficult choice.

It’s time to ask, is Clinton being looked at as “too big to fail,” just like the banks her buddy’s run on Wall Street?