Posted on April 9, 2015 by theurbanllama 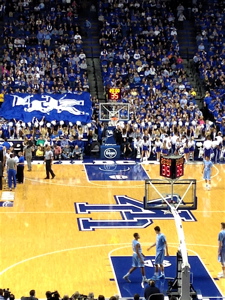 Congratulations to the Duke Blue Devils on their 68-63 win over Wisconsin. Kentucky may have been undefeated entering the Big Dance, but it was Duke that played hot from the first game of the tournament through to the championship.

I have no complaints with their victory. This isn’t like that 2010 run the Blue Devils made, where Kentucky choked to West Virginia in the Elite Eight game and opened a cushy path for Duke to win.

Playing as well as Duke was playing, it’s doubtful Monday’s result would be any different had UK found a way past Wisconsin in their Final Four matchup.

The UK loss is no tragedy by any means. Kentucky had an amazing run. You don’t go undefeated through an entire regular season, conference tournament and make the Final Four often. This current UK team is one of the most popular in recent history, and one that will live on for some time. It just will always have a disclaimer attached to it of “what if…”

Certainly the Wisconsin game was winnable, but UK brought their “B” game Saturday night, and that wasn’t good enough to beat a team the quality of the Badgers. The result begs the question of whether a constantly revolving door of predominantly one-and-done players can actually seal the deal.

Obviously UK was loaded with talent. But does sheer talent outweigh experience?

The 2012 Kentucky team finished the job, but that team had balanced leadership, and senior experience from Darius Miller to go with Anthony Davis and company.

As Mark Coomes so aptly pointed out in his story Monday, this is the second straight year a young and gifted Wildcat team was “denied a national championship by an older, shrewder team.

Kentucky and Connecticut each played eight men in the 2014 NCAA championship game. The Huskies had 23 seasons of college ball under their collective belt. UK had nine. The Huskies won 60-54.

Kentucky and Wisconsin each played nine men in Saturday’s national semifinal. The Badgers had 29 years of experience, the Wildcats 15. The Badgers won 71-64.”

It’s just not possible for UK to replicate the body language and non-verbal communication that these veteran teams possessed from spending several more seasons together. The core guy in a clutch situation like what the Wildcats faced Saturday night should have been Willie Cauley-Stein, but he went missing in action the entire game. That can’t happen.

This left the Harrison twins in charge. For some bizarre reason, after Karl-Anthony Towns had scored with 6:37 remaining to put Kentucky up 60-56, the team stopped feeding him the ball.

Towns won the Notre Dame game for UK by scoring 25 points. He is close to unstoppable near the basket, and unlike many big men, he can hit free throws reliably.

Towns finished with 16 points against Wisconsin, but they needed to keep riding that train. Instead the twins took eight of Kentucky’s last 11 shots – and missed seven of them.

To add insult to injury, the young Cats didn’t handle the pressure of losing well. Tres Lyles should have been ejected for cold-cocking Josh Gasser; certain UK player(s) exited the floor without shaking the victors’ hands; and Andrew Harrison uttered an inexcusably derogatory remark in the post-game press conference when the topic of Frank Kaminsky came up.

Kaminsky poured in 20 points and was spectacular. It was masterful how when Kentucky tried to run its defensive switches Kaminsky kept ending up with Devin Booker on him for a mismatch. Kaminsky used Booker early and often.

Kentucky easily had the talent to play with these other two teams but lacked the work ethic to achieve playing on the biggest stage in college basketball. It goes back to some very young men, lacking veteran leadership, who thought they were “entitled” to a championship, but didn’t recognize the work required.

I’m not sure what John Calipari does next. His philosophy of talent first, experience second, is highly successful to a point. His teams have reached the Final Four a bunch, but only won it once.

He needed to win this one to avenge the loss in the championship game last year in order to validate his philosophy. Calipari’s teams perform great in the regular season, but tend to come up short, often in spectacular fashion, instead of meeting their expectations.

That doesn’t necessarily mean a championship must be won each year. This UK team could have lost to Duke respectfully, but it should have beat Wisconsin. In 2008 his Memphis team had the title won against Kansas, but gave it away. There was the NIT loss to Robert Morris in 2013, and the abysmal upset defeat in 2010 to West Virginia by the John Wall-led team.

To Calipari’s credit he is a recruiting machine. The one-and-done kids he brings to Lexington are the same ones being chased by Duke, North Carolina, and Kansas. Yet to maximize the potential of the program it seems some measure of senior leadership is needed to balance the endless young guns arriving yearly.

No worries, Kentucky basketball is in a great place. Thanks to all the players and coaches for the outstanding job they did! The 2014-2015 season is one for the record books and will not be forgotten. Now the watch is on for who stays, who leaves, and who is coming to fill the shoes of Towns, Lyles, Cauley-Stein, and the Harrisons. One thing with Kentucky basketball, it’s never boring.