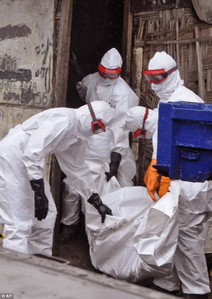 Officials in Liberia remove a victim of Ebola.

The Ebola outbreak spreading through West Africa now is expected to take upwards of nine months to be brought under control and could result in the infection of an estimated 20,000 people, at a cost of $490 million, according to a new 27-page report from the World Health Organization, which outlines a “road map” to end the outbreak.

One possible hero in this grim situation potentially resides in Owensboro, KY, with the declining tobacco industry there. This area is more notable for its barbecue and bourbon, but Kentucky BioProcessing is suddenly playing a lead role in finding a cure for patients infected with the deadly Ebola virus.

The Owensboro-based company has produced an experimental serum known as ZMapp, using local tobacco, which assisted in the cure of two American aid workers infected overseas. The tobacco acts like a photocopier to mass produce proteins used to make the serum. It’s similar to antibodies being produced in the bodies of people or animals after an infection. The plants are used to make the antibodies, and then they purify the antibodies, which is a faster process than traditional methods.

ZMapp had never been tested on humans previously, but subsequently has been successful in curing non-human primates infected with the Ebola virus.

This week a fifth country in West Africa joined Guinea, Liberia, Nigeria and Sierra Leone, in having a confirmed Ebola infection, as a man with Ebola symptoms showed up at a hospital in the Republic of Senegal. He is a 21-year old university student from Guinea, who concealed the fact that he had contact in Guinea with victims of Ebola. He has been quarantined in stable condition at a hospital in Dakar, Senegal’s capital.

The overall death rate for this outbreak of Ebola is 51 percent, with more than 40 percent of the cases having occurred in the past three weeks. To date there are 3,069 confirmed infections, resulting in 1,552 deaths. The troubling concern is that as disturbing as those numbers may be, officials worry that in areas where there is intense transmission the actual infection numbers could be two to three times as high as currently reported, due to families hiding infected members leading to all family members becoming contaminated.

This entry was posted in News, Politics, Travel and tagged Dakar, Ebola, Senegal. Bookmark the permalink.