It was a record-setting day last Saturday in Graves County, Kentucky, as the 134th annual Fancy Farm political picnic broke attendance marks with upwards of 20,000 people on hand to eat barbecue, support their candidates and jeer the opposition.

The main attraction was Kentucky’s U.S. Senate race. Republican Mitch McConnell is a 30-year incumbent and the architect of the GOP’s partisan gridlock strategy. Meanwhile his opponent, Alison Lundergan Grimes, is running on a change platform, and emphasizes that Kentucky is no longer Sen. McConnell’s focus, he is a Washington insider and the time has come to put somebody back in Washington who will look after Kentucky’s true best interests.

It’s likely $100 million will be spent in this race before it’s over. With that kind of cash there is no shortage of shots being traded by these candidates, but with the stakes so high both have been hesitant to schedule any debates. Fancy Farm put them on the same stage together only a few feet apart, where each had to sit and listen to their opponent skewer the other’s candidacy.

With numerous other candidates also speaking, it wasn’t until midway through the two-hour program that Grimes and McConnell were called. Each rose and faced the other as a coin was tossed. Grimes went first. With the vocal crowd evenly split, red t-shirts on one side for Team Mitch, and blue on the other for Grimes, the Democrat shouted over the boisterous crowd, “What a great crowd for Sen. McConnell’s retirement party.”

Fancy Farm is equal parts a church barbecue, a political convention, and a tent revival all under one open-air rooftop. Even with all the media, the event maintains a feel of barnstorming politics from the 1800s. Candidates have eight minutes to speak, so there is little room for the eloquent table-setting that usual goes with political speeches. Instead the messages are prepared with blood dripping, ready to serve to this hungry crowd.

Grimes hammered McConnell with the issue of pay equity for women, which Republicans filibustered this year. “If Mitch McConnell was a TV show, he’d be ‘Mad Men,’ treating women unfairly, stuck in 1968 and ending next season,” Grimes shouted.

This brief stump speech opened a new window into how this campaign is going to go moving forward. Grimes may be short on national policy experience, but she is smart, articulate and energized. She has a passion and is prepared to smack McConnell with his record and is certainly no empty dress. 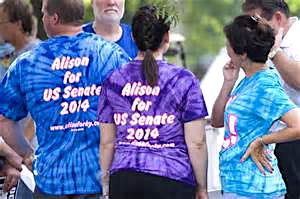 Grimes hit on several core populist Democratic issues including the minimum wage, supporting equal-pay-for-equal-work legislation and protecting labor organizing rights. It also was a chance to announce an endorsement from the United Mine Workers, a clear shot that shows unions and miners both think she has the best interest of coal workers at heart in Kentucky, the third-most coal producing state in the country.

While the speech Grimes delivered was little more than a string of rapid fire one-liners, and came off as heavily scripted and rehearsed, she did manage to deliver it on cue and under adverse conditions without a mistake. She is getting more comfortable under the big lights. Grimes still seems to fair better in scripted opportunities as opposed to a debate format, but the Democrats have a real candidate.

The Republicans on the other hand find themselves in a strange position. McConnell very easily could become the next Senate Majority Leader, but at the same time it would not be remotely surprising to see him sent home in defeat. Those two plausible plot lines don’t usually go together so easily in the same campaign, especially for a guy like McConnell.

There is no getting around he is vulnerable. His job approval numbers continue to hover around 35 percent. Coal jobs are dwindling, and there’s that interview where he uncharacteristically spoke off-the-cuff and stated that it wasn’t his job to create employment opportunities for out-of-work Kentuckians.

It didn’t appear McConnell’s pulse changed one beat from when he was sitting in his chair on stage to taking the microphone before this boisterous crowd. True, he has been here many times before, but it was more than that. McConnell appears physically tired these days and less than excited about dealing with a re-election campaign. That obstructionism is hateful work, and it shows.

McConnell’s speech was also telling as he barely acknowledged his opponent. It was all President Obama and Harry Reid, the current Senate Majority Leader for the Democrats, and how Grimes is their surrogate. Reid would have been amused with so much notoriety. He’s a pretty invisible guy. I wondered how many in this crowd even knew who Reid was. All the same, both Reid and Obama poll poorly in Kentucky, and McConnell is going with a strategy of saying a vote for Grimes is a vote for Obama.

“Kentucky is under attack from Barack Obama’s administration, and we need to fight back,” McConnell said. “There’s only one thing Barack Obama needs to keep his grip on power. He needs the U.S. Senate.”

McConnell jumped on his regular rant about Obama’s “War on Coal,” and how stringent EPA regulations are killing jobs in Kentucky’s coal fields. He told his supporters there is only one way to stop them, “That’s to change the Senate and to make me majority leader.”

Even McConnell recognized he couldn’t go it alone against the zeal and enthusiasm of Grimes. It required placing junior Sen. Rand Paul in the speaking slot just after McConnell’s speech, to offer a more colorful recitation of the same “a vote for Grimes is a vote for the Obama/Reid agenda” rhetoric already presented.

That’s the best McConnell had to offer. No solutions, no fixes, no positive vision for the future. Just tired ideas about wanting to take Kentucky backwards to a place without the Affordable Care Act, taking away quality health insurance from over 500,000 people – and dreaming that the coal seams in Kentucky’ mines could magically be transformed to appear as wide as a mountainside, instead of the 30 inches routinely found today.

It’s the same crap Mitt Romney and George Bush tried to spin. The Republicans want to play on peoples’ fears for all the rapid changes that are occurring in the modern world – and try to sell this image that they can return things to the 1930s, where white America ruled, the U.S. was number one in everything and life was less complicated.

The problem with selling this Fantasy Island, as Romney found out and W’s poll numbers showed on his exit, is that reality is so far past that point of reference that the mirage falls apart. There are real problems with finding enough energy to go around, water is becoming a commodity, the weather is unpredictable, immigration is messy, contagious viruses are getting closer, and America’s rank amongst other world countries is no longer in the Top 10.

Would anyone really think it’s a good idea to have Andy Griffith and Barney Fife out there trying to quell the drug epidemic, attempting to apprehend gang members or working border patrol. Republicans are having a difficult time coming to terms with the fact that their party numbers are dropping, as there are fewer and fewer white males that follow this revisionist line of thinking.

This time around it appears McConnell would just prefer to hurry things up, and dispense with the inconvenience of a re-election campaign, so he could get back to the regal halls of Congress, where he is more comfortable and worshiped. McConnell is a cagey politician, and knows better than to promise any of this revisionist fantasy. As they say, the horse has already left the barn, and these kinds of promises can’t be delivered. It’s only window dressing, but this leaves tenure as his only argument for re-election. Do the people of Kentucky really want to go back to the end of the line with Grimes from a seniority standpoint, who will only vote the way Obama tells her to vote.

It would be one thing if McConnell was using his position to take care of Kentucky, but he hasn’t really done anything of significance for years now. He likes to gloss over the fact that he too held office during this period of time that has seen the largest decline in the coal economy. That is because coal is a business, not a right of employment. The folks who own these coal companies have a bottom line, and the fact of the matter is the coal left in Kentucky is in narrower seams and in harder to reach locations. This isn’t about Obama or any “War on Coal.” It’s a cover story for the fact that it’s now too expensive to get Kentucky coal out of the ground. This career choice of being a miner is evaporating, and its exit is being hastened by the plentiful and cheap substitution of natural gas.

So while I get Obama may not be popular in the Bluegrass for several reasons, with the color of his skin being a more likely culprit than his politics, and McConnell being within breathing distance of his dream job as Senate Majority Leader – there remains nothing tangible being offered by McConnell in terms of how he might make life better for those living in Kentucky. He basically is putting his obstructionist policies in play for the campaign. He lacks the vigor or conviction to explain why Grimes would be a poor choice, so he puts a smokescreen up of Obama and coal for the rubes who watch Fox News to latch onto as they continue to live their disadvantaged lives in a world of poverty.

The crux of this campaign comes down to whether Grimes can make the election about the merits of each candidate currently, and what plans they have for Kentucky going forward, versus this battleground Senate race turning into a referendum on the Obama administration.

“This race,” Grimes said, turning to McConnell, “is between you and me and the people of Kentucky.”