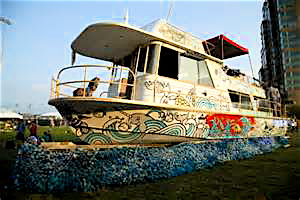 The Forecastle music festival in Louisville continues to grow and find its place as one of the signature events Kentucky has to offer. Running since 2002, the three-day music, art and cuisine event this year drew just over 60,000 visitors, slightly up from 2013.

To Forecastle’s credit its organizers place more of a premium on improving the experience for its festivalgoers over simply trying to grow attendance. JK McKnight founded Forecastle, but has transitioned over to handling more of the brand sponsorship angle of the festival, leaving the running of it up to Knoxville-based AC Entertainment, who is associated with the ginormous Bonnaroo event in Manchester, Tenn.

This is the third year of Forecastle’s partnership with AC Entertainment, and there are positive results. The festival is more polished, the field attractions, stages and all the eye-candy atmospherics that 20-somethings are looking for in a festival experience are growing more noticeable. Keep in mind that an event like Forecastle isn’t meant for those much over 30 years of age. If older demographics attend that’s great, they have more disposable income, but the young un’s want a party atmosphere.

I love the increased profile and added innovations in Forecastle’s Bourbon Lodge. It is an excellent way to introduce a new generation of cultural influencers to the native spirit of the Bluegrass, and opens up a different attraction angle for the festival. Likewise, the Kentucky Landing, which debuted this year, offers beer drinkers only Kentucky-brewed options. There also was the strategic use of food trucks to provide a wider perspective of menu options to hungry attendees. 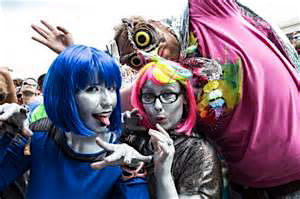 There were no long waits for food, drinks or bathrooms at the festival, allowing Forecastle to keep its small-community feel from when it began in Louisville’s Tyler Park. My guess is the organizers are looking to get more like 75,000 at Forecastle, and they have a good shot at that going forward, but it will take a stronger musical lineup.

The 2014 headliners were Outkast, who hasn’t done much of anything for seven years, Jack White, and Beck. Don’t even try to sell The Replacements. They were alcoholic no-shows back in the 80’s and we saw what kind of draw they pulled at Coachella, awful. The problem for Forecastle is while it did have a diverse lineup, the undercard featured a bunch of bands that for the most part would only play early afternoon sets at festivals like Lollapalooza or Bonnaroo.

Don’t get me wrong, this lineup is still quality, especially in Kentucky, where getting folks out to individual alt shows is a challenge, so grouping them into a festival format is smart and pulls an audience. But if organizers hope to keep this current level of interest and bring in another 15,000 ticket purchasers, they will need to step their game up and offer a lineup that has more sizzle throughout. 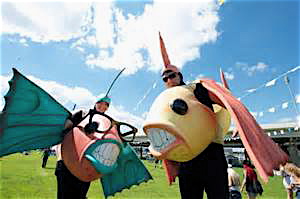 One winning indicator is that Forecastle recognizes that if it offers a fairly generic festival lineup, one way it can set itself apart from other fests is to brand itself Kentucky-made, by featuring bourbon, local beers, area star chefs, and Hunter S. Thompson.

Forecastle is a great addition to the music scene in Louisville, and with a strong Kentucky identity, it will continue to grow as a travel destination for those outside the Louisville metro area.

If you are interested in checking out Forecastle, I highly recommend getting on their mailing list. They do offer early bird specials that are considerably cheaper than the $184.50 charged for three-day passes this year. Just buy them even though the artists will not be announced. It’s a fun time, it’s local, and live music sounds even better outside in the summer.