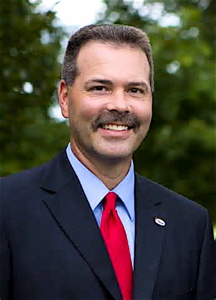 I appreciate that Republican Richie Farmer, the former commissioner of agriculture in the Commonwealth of Kentucky, has not yet been convicted of any crime, but a federal grand jury has indicted him, and they don’t indict lightly.

Farmer is charged with misusing more than $450,000 during his eight years in office.

It’s nothing new that another public official has been caught stealing, but Farmer’s fall from grace has been particularly meteoric. This guy rose up from a small town to become a basketball hero, capitalized on his notoriety to launch a successful statewide political career, to now being unemployed and under federal indictment.

Farmer had punched the proverbial golden ticket. He had won the game of life, but that wasn’t enough. Instead of being grateful, he felt he was entitled to more.

Now he may spend the rest of his life in jail.

Farmer, 43, began his rise to prominence in high school, where he led tiny Clay County to the Sweet Sixteen state basketball finals three times, winning the title in 1987, and being named the state’s “Mr. Basketball” the following year as a senior.

He went on to play at the University of Kentucky, which at the time was suffering through turbulent times under coach Eddie Sutton. The Wildcats were already on probation for an extensive scheme of paying recruits, when an overnight mailing envelope from a Kentucky assistant coach to a player’s family member was discovered with $1,000 cash in it; also, a UK player was alleged to have received improper assistance on his college entrance exams and was banned from NCAA competition.

Coach Sutton and UK’s athletic director, Cliff Hagan, were forced to resign and the Wildcats were slapped with three years probation, a two-year ban from post-season play and a ban from live television in 1989-1990.

Star sophomore Rex Champman declared early for the NBA, and other players transferred in the wake of the scandal. Rick Pitino was hired away from the New York Knicks to come to Lexington and steady this floundering program. Throughout the turmoil, Richie Farmer, already sporting his trademark thick mustache, stayed at Kentucky to do what he could to help bring the Wildcats back to prominence.

Farmer, along with fellow seniors, Deron Feldhaus, John Pelphrey, and Sean Woods, became known as “The Unforgettables.” They were recognized for their gritty play and emotional brand of basketball. These guys never would have received this much playing time on the Kentucky team before it went on probation, but they stuck around when things went bad and rose to the occasion, and the public embraced them for that. 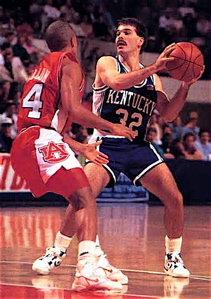 Farmer in his playing days with UK.

In 1992, their senior year, Kentucky came off probation and had become a competitive squad with the addition of star sophomore Jamal Mashburn, and a run-and-gun style that utilized the 3-point line as a strategy and weapon. The Wildcats made a deep run in the NCAA tournament before losing to Duke, 104-103, in the East Regional Final on “the shot” by Christian Laettner.

Adding to this team’s popularity was the fact that Farmer, Feldhaus and Pelphrey were all from small towns in the eastern half of Kentucky. The four seniors had their jerseys retired by UK immediately after the Duke loss, a rather unusual and distinctive honor.

In 1992, Farmer earned a Bachelor of Science from the University of Kentucky with a double major in agricultural economics and agribusiness management. He had the perfect combination of popularity, education and ambition in which to start a political career.

Unfortunately, Farmer failed to learn a life lesson from the greed and corruption that he saw first hand under Coach Sutton.

A grand jury in Lexington has charged Farmer with four counts of converting state funds and property to personal use, and one count of soliciting a bribe in exchange for a state grant.

All these allegations relate to a willful abuse of power.

You can’t create high salaried fake political jobs for your buddies and girlfriend and not expect somebody to notice – especially when there aren’t any responsibilities attached to these jobs nor expectations that the individuals show up for work.

State employees also ran personal errands for Farmer, and helped around his house by building a basketball court, placing flooring in his attic and organizing his personal effects.

It’s alleged that some of those items were converted to personal use.

Farmer also reserved hotel rooms in the names of state employees for the Kentucky State Fair in 2009 and 2010, but the rooms were used by members of his extended family.

Richie also is accused of trying to solicit a bribe from an automobile dealership in exchange for a grant from the Kentucky Department of Agriculture, to stage an all-terrain vehicle safety course.

Sadly much of Farmer’s behavior was recognized during his tenure, but allowed to persist because of his position of power. People weren’t comfortable talking until after he made the decision to run for lieutenant governor on the 2011 ticket.

The first public glimpse that there was trouble in Wonderland came when Farmer’s wife, Rebecca, filed for divorce in May 2011, just days before the Republican primary. That sent a message that everything wasn’t as it appeared. The couple had been married for 13 years, had three children together, and suddenly separated.

It was learned through the divorce proceedings that Farmer was making $110,346 per year, which his wife rightly came after in order to maintain her lifestyle and that of her children. The problem was once he lost the election in November, the money was gone.

The incoming agricultural commissioner, Republican James Comer, immediately requested a full audit of his predecessor. In March 2012, the state’s Executive Branch Ethics Commission charged Farmer with 42 counts of violating state ethics laws, the most ever issued by the panel against one person.

State Auditor Adam Edelen said a “toxic culture of entitlement” permeated the agriculture department under Farmer, who was commissioner from 2004 through 2011.

Once rumors of these charges began circulating Farmer’s political career was over. The only move he had was to return to his hometown of Manchester, where he took a job selling cars, hoping his UK fame still had some currency.

This didn’t work out either and he remains unemployed.

It’s unclear how Richie is paying his bills. Mounting a defense for this case will not come cheap. It begs the question of whether a deep-pocketed Big Blue booster is flipping the tab?

After pleading not guilty, Farmer had the audacity to ask the judge if it was all right for him to take a scheduled trip to Mexico, where he planned to help his girlfriend, Stephanie Sandmann, celebrate her 40th birthday.

U.S. Magistrate Judge Robert Wier didn’t see the humor in this request and declared Farmer must stay in the state until his trial begins on October 22.

The hard thing with this case is Farmer was supposed to be a sort of favorite son to folks in Kentucky. Whether you liked his politics or not, the guy pulled himself up from humble beginnings and made something of himself. He was Kentucky born and bred – but he tossed all that away and bit the hand that fed him.

Now the money, title and power are gone.

People tend to expect political corruption, but considering how Farmer made his way into politics through success on the basketball court, his downfall is a disappointment. 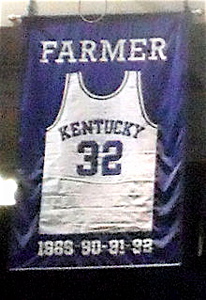 College basketball in the state of Kentucky is a holy endeavor. It can’t be accurately explained, nor is it necessarily proper, but it’s the truth. UK players are like characters in an ever-expanding fairy tale. Their story gets retold again and again for generations to come.

Farmer had a prominent place in the folklore of UK basketball that belied his talent because of his role as one of “The Unforgettables.” He can’t be removed from the equation, but his contributions can become muted.

What lingers in the minds of Kentuckians I’ve spoken to about the Farmer scandal isn’t whether he will be found guilty or spend time in jail – it’s whether somebody will actually have to crawl up into the rafters of Rupp Arena and pull down his retired jersey.

That would be the ultimate insult and embarrassment.

This entry was posted in News and tagged Richie Farmer, The Unforgettables. Bookmark the permalink.