For Michelle Hanvey A Career Awaits After Graduation 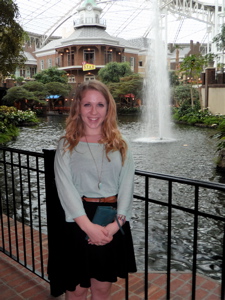 Michelle at a relaxed moment in Nashville, at the Opryland Hotel.

Since her student days at Western Hills High School, Michelle Hanvey knew she wanted to be a teacher. The question was the path she would take to reach that goal.

After taking part in everything W.H.H.S’s English Department had to offer, the opportunity was there for Hanvey to jump on board and begin a career in community service with AmeriCorps, but deferred instead to enroll at Northern Kentucky University.

“Michelle was a superstar at Western Hills, she won our English Department Award, and was outspoken for those that couldn’t take up for themselves,” said Lauren Hill, Michelle’s AP English instructor. “There are lots of kids that make good grades, but Michelle could put the information into context and get the whole meaning.”

“I’m in a mixture of denial it’s actually happening, and really excited to be done (with college),” said Hanvey, regarding her impending graduation.

For those who know Hanvey, 22, it’s not surprising success has come her way so early. She has an old soul, and embodies a dedication, enthusiasm and drive to achieve that belies her youth. This is something her family has seen all along.

“Michelle was singing the alphabet song back to me before she was even 1-year old,” said Susan Arvin Hanvey, Michelle’s mom. “Before pre-school she was bitterly angry that she couldn’t read, so I sat her down and taught her using phonics in about an hour – she was at a high school level in elementary school.”

Like many driven people Hanvey needs stimulation to keep her occupied. As a kid it was painting and drawing, now it’s yoga and tons of activities.

Standing five foot nothing, with flowing blonde hair, blue eyes and a disarming smile, Michelle is a “Mini-Me” version of her mom, which is both flattering and slightly contentious. She appreciates everything her family has done for her and loves them dearly, but has a strong independent streak and is ready to blaze her own path.

“I don’t want to take credit for what Michelle has achieved,” said her mother. “She may have been inspired by me and the family, and she does come from a long line of educators and leaders, but she took it to the Nth degree.”

After completing her freshman year at NKU, there was something missing from her college experience.

“I joined Phi Sigma Sigma my sophomore year because I wasn’t as involved on campus as I wanted,” said Hanvey. “This was a gateway for me – it provided motivation and support, and a pathway to gain leadership and achieve change.”

She represented her sorority at council meetings as a Panhellenic delegate on the executive board, shepherded potential new sorority members through the recruitment process, and served on an expansion committee that successfully invited a new sorority to campus.

Since she had to give speeches, organize elections and attend board meetings, Hanvey found Greek life to be good preparation for real life.

Yet the biggest impact sorority life had upon Hanvey came about accidentally, from the community service they performed as a group.

After doing some volunteer work with Big Brothers Big Sisters her sophomore year, Hanvey decided to become a Big Sister, and has continued that role as mentor through her senior year with an 11-year old fifth grader in an area elementary school.

This necessitated undergoing a lengthy application process, background check and being assigned to a caseworker. Hanvey and her little sister spend time together weekly scrapbooking, making picture frames, doing homework and playing board games.

“I try to supplement her academic work with things like brainteasers that teach information in a different way,” said Hanvey. “I never thought I would have done this as a high school senior, but I can’t imagine anything else as a college senior.”

The vulnerability Hanvey noticed in middle school aged children left a lasting impression upon her. This got her to thinking that if she could set a good example, perhaps that could serve as a reference point for kids to look back upon when they grew older and were faced with hard decisions of their own to make. 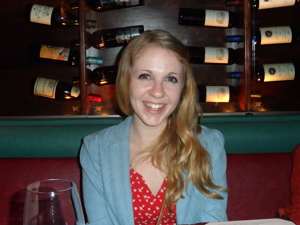 This led to her application to Teach for America at the beginning of her senior year.  Hanvey had lived her whole life in Kentucky and wanted to explore the bigger world. Plus she had become aware of the growing U.S. achievement gap, between graduation and dropout rates in affluent and poor neighborhoods.

“It’s a vicious cycle,” said Hanvey. “I was fortunate, but sometimes being born in a different zip code will give a person a whole different life from another.”

After applying for selection to Teach for America last August, Hanvey decided she would be a more competitive applicant if she had more personal experience with children, so she took on the job of being a mentor and tutor with the Boys & Girls Club of America.

“It’s really natural for me to go into the schools,” said Hanvey. “I have lots of teachers in my family and it’s second nature to me working with kids.”

Five days a week, from around 3 p.m. to 6 p.m., she works with 50 children at Tichenor Middle School, in Erlanger, Ky.

This April Michelle was the recipient of the Panhellenic Award, which recognizes excellence and achievement within the NKU Greek community. Hanvey donated the $500 prize to the after-school program at Tichenor Middle School.

“Michelle has developed relationships that have forged bonds with the kids that is something that can’t be taught in a classroom,” said Jodi Disselkamp, Michelle’s supervisor at Boys and Girls Club.

Only about 10-12 percent of applicants to Teach for America get accepted. Michelle will begin her two-year stint in June when she goes to Delta State University for an orientation session. She starts her actual classroom teaching experience at the Lighthouse Charter School in Pine Bluff on July 19. The school will pay Hanvey’s salary, plus she will receive a $10,000 education grant upon completion of her TFA obligation.

“I loved the selection,” said Hanvey. “I immediately looked up the school, and it uses a rigorous academics model, but also offers a focus on art infusion.”

At 570 miles away from Frankfort, it may only be a day’s drive, but Pine Bluff is a world away in culture. Situated in the southeast portion of the state, 40 miles south of Little Rock, Pine Bluff is an agricultural community that has fallen on hard times.

Census data lists its population at around 48,000, with more than 25 percent of its residents living below the poverty line.

Crime is a problem there, but Pine Bluff also offers a heritage that is rich in tradition.

It’s precisely the type of location desperately in need of enlightened scholars to teach its next generation of children. Some might look upon this journey with trepidation, but Hanvey feels prepared and is excited by the challenge. 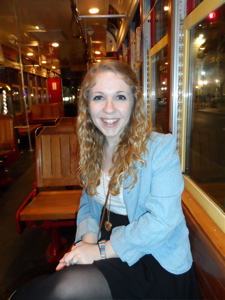 Cruising around New Orleans on the streetcar.

It’s the idea of paying it forward. She has gotten a good education, now she wants to do something with it. That’s an aspect where Michelle and her mom see eye to eye.

“Education is something that can never be taken away from you,” said her mom. “If you just keep it to yourself what good are you doing for the planet – pay it forward.”

Michelle is unsure where her future may lie, except that it will be somewhere in education. Long range, she may pursue advanced degrees and eventually teach at the college level.

But for now she’s looking forward to beginning her life in the real world of teaching.

“I don’t know where I’ll be in 10 years, hopefully doing something extraordinary,” said Hanvey. ““I think my dad said it best, ‘I don’t know how to fail,’ and that’s true.”