Leonard Cohen Proves He Is Our Man

Posted on April 4, 2013 by theurbanllama 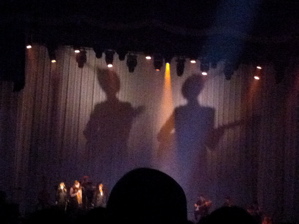 Leonard Cohen at the Palace | photo by Maia Langley.

After a recording career spanning more than 45 years, singer and famed songwriter LEONARD COHEN finally found his way to a performance stage in Kentucky, playing magnificently to a sold out crowd at the Palace Theater in Louisville Saturday night.

I must admit I am a novice Cohen fan. I know he is recognized for his song “Hallelujah,” made popular by Jeff Buckley, that he was inducted into the Rock-n-Roll Hall of Fame in 2008, and is a revered figure in popular music, but that’s about it.

His career was too expansive for me to research at the last minute, so I went into this concert as a blank slate, not entirely sure what to expect.

I had Maia with me, who knows him cold. I could sense her excitement as we were heading into the show, and there was a level of electricity in the crowd.

These are good signs.

It was a mixed audience, definitely older, but ran the gambit from hipster couples, to young single women, grandmothers, and the obvious NPR crowd.

Ticket prices were part of the reason this show skewed older. Seats started at $49.50, which sold out fast, then went as high as $252.50, which after service charges and such was essentially $300. That’s no joke in this economy.

A funny thing happened regarding tickets. We had balcony seats, and were making last second runs to the bathroom and bar before heading upstairs, when this diminutive gentleman in a suit, who worked for the Palace, asked us if we needed any help finding our seats. Maia showed him our tickets, and he offered us a pair of mid-level orchestra seats for our enjoyment.

Mind you this was not in exchange, but in addition to our tickets. Not sure what that was all about, but why not…

We tried the orchestra seats first, which were just under the overhang from the balcony. The house lights dimmed, cheers erupted, and out walked this trim figure, silhouetted in a tailored black Armani suite with matching fedora.

With a doff of his chapeau in appreciation, we were welcomed inside Cohen’s world, where he addressed us as friends. Instantly any purported pomp or arrogance that could be presumed was erased. This was going to be a warm show, unpretentious and personal.

And with that the band launched into, Dance Me To The End Of Love.

In retrospect, this song set the tone for the evening.

Leonard Cohen has been a naughty boy. He’s an attractive guy with a poet’s tongue and a gift for seduction. He chased lust and lost love.

Regret was a recurring theme for the evening, but it was tempered by Cohen’s celebration of the female form and general infatuation with love itself.

He appears to be a man who falls in love quickly, but has an incurable wandering eye, and only upon reflection does he realize how he cheated true love.

This leads to a pleading for forgiveness, such as in the song “Anyhow:”

I dreamed about you, baby, you were wearin’ half your dress; I know you have to hate me but could you hate me less? I’ve used up all my chances and you’ll never take me back; But there ain’t no harm in askin’, could you cut me one more slack?

The other predominant themes on display were religion, depression and politics.

These are all weighty topics. It’s no light matter being at a Cohen show. There is a darkness due to his misgivings and behavior. 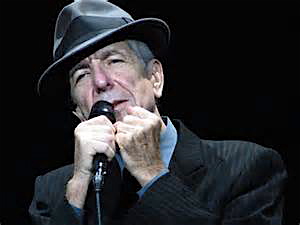 But here is this 78-year old man, who took time out from his career back in the 1990s to become an ordained Buddhist monk, that is self-aware and knows his transgressions well. Like a comedian, Cohen has plenty of personal baggage to use as material, and there was no lack of self-deprecating humor.

There also was a sultry side to this performance, a bedroom aspect, to the sex and debauchery that is personified by Cohen’s deep baritone voice.

This is the true star of the show.

There are few voices that are readily identifiable regardless of the song: Bob Dylan, Johnny Cash, Tom Waits, or maybe Greg Brown.

These voices have personality and can tell a story by themselves. The difference being Cohen embraces his instrument and works his lyrical style like a guitarist bends notes, keeping listeners hanging on every breath.

He doesn’t so much sing as recite his lyrics.

Cohen is like that voice inside us all that only we can hear, which says things never meant to be spoken out loud.

His band was fantastic. The jazz and gypsy-waltz background was the perfect accent to Cohen’s delivery.

The secondary stars of the show were the backup singers. SHARON ROBINSON, who is a collaborator of Cohen’s, and the sublime WEBB SISTERS from the United Kingdom. All had voices of angels, offering light to Cohen’s dark tales.

Interestingly, these are some of Cohen’s brightest days. His 2012 release, “Old Ideas,” became the first No. 1 album of his career, even momentarily knocking the omnipresent Adele out of the top spot for a week. Now Cohen is continuing his travels on the most ambitious and extensive tour of his career. 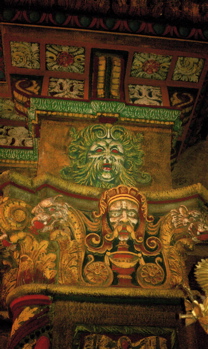 A shot from the Loge Level by the bar in the Palace.

While expensive, you did get your money’s worth at this show. It lasted a solid three hours, not including a 30-minute intermission – totaling 29 songs.

We went upstairs to our original balcony seats for the second set, which was great and offered equally good sound, along with some crazy cool architecture.

I couldn’t help but be impressed by this Canadian’s enthusiasm and endurance. Many times during the set Cohen would drop to his knees for emphasis or pleading forgiveness. He was a force of nature throughout, rocking back and forth, grooving like a hepcat to his own rap.

He literally came skipping out for the third encore.

It was good to be in Cohen’s world.

1 Response to Leonard Cohen Proves He Is Our Man