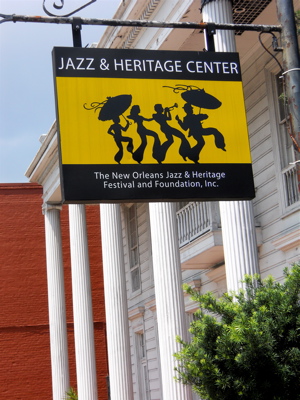 Outside the Jazz Fest headquarters on N. Rampart Street.

Things are jumping in New Orleans these days. Mardi Gras is rolling towards its Fat Tuesday climax on Feb. 12, and the Super Bowl is being hosted next Sunday. You want to see a big party watch all these Mardi Gras parades roll next weekend with the Super Bowl crowd in town.

But I’m here to give a shout out to the next big event on the New Orleans cultural calendar, the Jazz Fest, as its lineup was announced Jan. 17.

The Festival is held the last weekend in April and first weekend in May, which means the second weekend conflicts with the Kentucky Derby. This year the dates are April 26-28 and May 2-5.

It’s tempting to try doing both weekends, and many people coming from Europe and Australia stay for both since they’ve traveled from far and wide, but having persistently done the double dip I must recommend it with trepidation. That’s a brutal 12 days to go without sleep. Even at a young age it’s a rough ride and will take your body some time to recover, so plan with caution.

This isn’t the Fest’s most ambitious lineup, but it ain’t too shabby either. 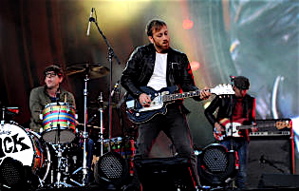 The Black Keys: Dan Auerbach on guitar and Patrick Carney on drums.

The Black Keys are smoking hot and will draw a huge crowd; Widespread Panic has been on hiatus and is currently engaging in an abbreviated tour – they will fill the field; Fleetwood Mac never plays festivals; Frank Ocean is a member of the experimental hip hop collective OFWGKTA and hails from New Orleans – should be an emotional set; Gary Clark Jr., from Austin, Texas, is one of the best young guitarists out there, and he’s blowing up; Dave Matthews always draws a record crowd; and I imagine Billy Joel will deliver a monster set after his 2008 appearance was drenched in rain.

This is a nice group of headliners, but it’s the under-card at Jazz Fest that makes this event special. These acts play every year in some incarnation, and for those who attend often, seeing these musicians yearly marks the passage of time.

Dr. John, the Night Tripper, or Mac Rebennack, whatever you want to call him, this New Orleans rhythm and blues legend is the real deal. Drugs, addiction, pimping, prostituting and prison, Dr. John has all that plus five Grammy Awards, and spot in the Rock-n-Roll Hall of Fame. He played at the farewell show for the Band that later became the movie “The Last Waltz,” and that little festival down in Manchester, TN, got its name from his 1974 album “Desitively Bonnaroo.”

Everybody needs an appointment with the good doctor at some point in their lives. And with his 2012 disc, “Locked Down” having been produced by Dan Auerbach from The Black Keys, rumors are rampant that Dan and the Doctor will be playing together at Fest.

The Neville Brothers and the Marsalis clan are the co-first families of New Orleans. The running joke is every year around Jazz Fest there is a new Neville or Marsalis popping out from somewhere – and damn if they aren’t all good.

The Neville Brothers are part of the biggest story at the 44th annual Jazz Fest. They’ve anchored the closing slot on the second Sunday forever. That privilege is always reserved for them. This year Aaron Neville decided to further his solo career and left the family band, so their usual closing slot was vacated.

As a result Art, Charles and Cyril will perform as The Nevilles on the first Sunday, just before Dave Matthews, and Aaron Neville will close out the Gentilly Stage on the second Sunday with his own quintet.

But the bigger part of the story is that Troy “Trombone Shorty” Andrews, and his band Orleans Avenue, have been given the Neville Brothers’ old closing spot. This is a torch passing moment as the 27-year old, who was taken under the wing of Lenny Kravitz at a young age, has blossomed into a mega-star.

This kind of history and back story about who is playing with whom, what stage they are on and what time they play is part of what makes Jazz Fest so special. There is a depth, familiarity and a family relationship between the community, the artists and the city of New Orleans unlike anything found at SXSW, Coachella, Bonnaroo, Lollapalooza, or Austin City Limits.

Here are some of the other folks deserving attention:

Composer and pianist Allen Toussaint; Kermit Ruffins and the Barbecue Swingers; Walter “Wolfman” Washington and the Roadmasters; The Meter Men, which is three-fourths of The Meters, minus Art Neville, but includes Leo Nocentalli on guitar, George Porter Jr. on bass and Zigaboo Modeliste on drums, which will still be plenty funky; Anders Osborne is like The Black Keys via Sweden and New Orleans; Rebirth Brass Band, Dirty Dozen, Hot 8, or Soul Rebels are a must; Sonny Landreth is one of the best slide-guitarists on Earth; Ivan Neville’s Dumpstaphunk is straight nasty; Deacon John, Pete Fountain and Dr. Michael White are classics; Voice of the Wetlands All-Stars is an ensemble of several artists mentioned here; Big Sam’s Funky Nation, Papa Grows Funk and Kris Royal are current ambassadors of New Orleans-based funk and jazz; Meschiya Lake, Pokey LaFarge and Gal Holiday represent the vanguard of young folks who play depression era jazz, bluegrass and honky-tonk (gotta love chicks with tattoos); Marcia Ball; Irma Thomas; Amanda Shaw is a prodigy on the Cajun fiddle; Los Hombres Calientes; Corey Henry alone or with Galactic is the shit; trumpeter Terence Blanchard; Cowboy Mouth; and The New Orleans Bingo! Show, which is a mix between a circus act, a bingo game, burlesque and some serious jams.

I’m still a sicko for the headliners, but certain folks just need to be seen at Jazz Fest. It brings out the best in them and in the crowd.

Tickets for each day of the 2013 Jazz Fest are $50 until day of show. They increase to $65 at the gate. For those looking for VIP treatment check out the Big Chief VIP Experience, the Grand Marshal VIP pass or the Krewe of Jazz Fest pass.

This really is a unique and vibrant festival. The music is foremost, but the art, culture and food play an equal role. Plus there are the AFTERshows.

New Orleans is full of live music venues, and there is no closing time, so many of the artists hang around to play night shows. This sets up some epic collaborative moments. As concerts end in the big rooms, famous musicians start dropping by the clubs to gig with friends.

The Jazz Fest ends daily around 6:30 p.m., so there is plenty of time to get a shower, a meal, maybe even a nap, before hitting the clubs. Many of the best shows don’t kick off until after 2:00 a.m., and they go well into the next day. The BBQ trucks will hit Frenchman Street at daybreak ready to feed hungry ravers still up from the night before.

The thing with Jazz Fest is it doesn’t matter which weekend you go, or even who is playing, the food, atmosphere, people, city, sounds, smells, all combine to make it an amazing experience.

This entry was posted in Events, Food, Music, Travel. Bookmark the permalink.