The Phunny Phorty Phellows Begin the March to Mardi Gras

Posted on January 8, 2013 by theurbanllama

This Phunny Phellow is already on the streetcar getting his drink on.

I trust everyone had a happy Epiphany? Not sure? It took me doing a touch of religious research to figure that one out as well. More to the point the arrival of the Epiphany means Carnival season is officially under way.

This story falls under the heading of “only in New Orleans.”

Sunday night, the Phunny Phorty Phellows boarded a streetcar in New Orleans amongst considerable fanfare, wearing costumes and in various states of sobriety, they did their yearly duty of riding roundtrip on the St. Charles Line to signify the start of the Carnival season, then headed to their coronation ball.

I’ve lived in New Orleans twice and still haven’t unlocked all the meaning behind the city’s festivities. It’s easy to get caught up in an excuse to celebrate, but after watching Mardi Gras up close I realized there is a deeper meaning behind all the floats and merriment. 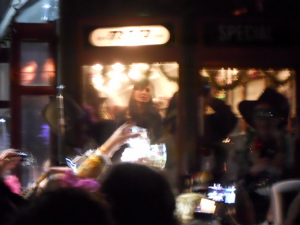 The mystery of New Orleans – a beautiful woman captured in the hazy light, drinks and merriment in the air; the possibilities are endless…

New Orleans is one of America’s older cities, established in 1718, and it is a place that brims with customs and traditions. There continues a strictly adhered to debutant season, where young women have their coming out parties, secret societies abound and memberships in Mardi Gras Krewes are handed down over generations like season tickets to Kentucky basketball.

When I say Epiphany I’m not talking about a sudden insight. It’s a Christian celebration that commemorates the manifestation of Christ on Earth in human form. This comes on Jan. 6 and can be marked by a feast, or in this case a festival of Phunny Phorty Phellows riding amuck in a streetcar.

It also marks the conclusion of the 12 Days of Christmas. The math gets a little fuzzy here, but the 12 days start on Christmas and historically gifts would be exchanged through Jan. 5, but commercialism, practicality, and the celebration of the New Year put a stop to much of that long ago.

The modern version looks upon Jan. 6 as the Twelfth Night, the end of the 12 Days of Christmas, and the Epiphany all rolled into one.

Mardi Gras, through all its hedonism, is a religious undertaking. It is a pre-Lenten carnival that allows people to exercise their demons before Ash Wednesday, when 40 days of fasting and penance begin to usher in Easter.

It was first celebrated in Louisiana in 1699. Carnival balls began being held as early as 1743, and in 1857 the Mistick Krewe of Comus, the first and oldest Mardi Gras Krewe, held its first parade and started the tradition of using floats.

Between Jan. 6 and Feb. 12, which is Mardi Gras day in 2013, there will be almost 90 parades in the New Orleans area. Before the huge crowds begin showing up for the super parades like Rex and Bacchus, locals will be out with their kids, putting up modified ladders all painted and decorated, so kids can get above the adults and catch the beads and trinkets being thrown from the floats. Yeah there is plenty of drinking throughout and parties, but really Mardi Gras is a family affair.

The ride of the Phunny Phorty Phellows, who first appeared in 1878, holds status because it heralds in the arrival of Mardi Gras. 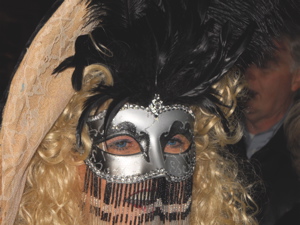 This woman’s striking blue eyes just jumped out from behind her mask.

Another reason that might help make sense for why thousands of people would come out on a Sunday night wearing masks and carrying signs to watch some crazies in a streetcar is Twelfth Night signifies the end of the off-season in New Orleans.

Aside from the Sugar Bowl, which only brings in sports fans who mostly confine themselves to the French Quarter, New Orleans has been relatively quiet since Halloween. That concludes the official party season, unless you count the Saints and LSU football.

This makes the advent of the Phunny Phorty Phellows a particularly welcomed sight. The start of Mardi Gras season is sort of like Groundhog Day – the shadow is gone and the alarm clock has sounded – hibernation is over. Time to find a costume and get your to-go cup ready to roll.

The scene at the Carrollton Street car barn is an oddity. Those who prefer to see the Phellows off gather here around 6:00 p.m. to tailgate prior to the streetcar departing promptly at 7:00 p.m.

There can often be several hundred folks clad in masks and costumes, drinks in hand, waiting for the countdown. The Storyville Stompers Brass Band keeps the atmosphere pumping. Commotion surrounds the streetcar, which is bedecked in yuletide dressing, with a sign hanging from it reading, “It’s Carnival Time!”

The mood is full of humor and whimsy. After an official ribbon cutting ceremony, this rowdy krewe and the Stompers are herded onto the streetcar and away they go.

The revelers sip champagne and throw the first beads of the season to spectators along the route. Two King Cakes are on board, one for the ladies and one for the gents. The lucky two who pull the slices containing the gold plastic Carnival babies are declared the Queen and Boss Phellows for the year.

This merriment goes right in keeping with the Phunny Phorty Phellows’ motto of “A little nonsense now and then is relished by the best of men.”

Note: All the photos and videos in this story were taken by the Urban Llama, but are from the 2011 edition of the Phunny Phorty Phellows.