On The Way To A Pool Party…

The shattered remains of an Acura on I-64.

Maia’s boys, Gabriel and Jacy, returned from Portugal this week after spending the summer in Europe with their father, where they had a great time revisiting the culture they grew up around, seeing family, and going on an archeological dig.

What better way to welcome them back to America than to throw them a pool party and barbecue.

Yesterday should have been an extremely peaceful and low-key afternoon. That is the mindset Maia and I were in when we left the house around 1:00 p.m. for the 40-minute drive west to Simpsonville where her parents live.

It was a perfect late-July Sunday. The skies were clear, temps were in the mid-80s, and all of us had slept in late after staying up to watch the Olympics.

I grabbed a cup of coffee to go and pumped up Bob Marley’s Rebel Music in the car to spread around some positive summer vibrations.

Then about 15 miles out-of-town, between the Graefenburg and Waddy/Peytona exits we came upon a single vehicle crash that just occurred.

We were going 75 mph and suddenly everyone hits their brakes as a black Acura had gone off the road, over-corrected and flipped. 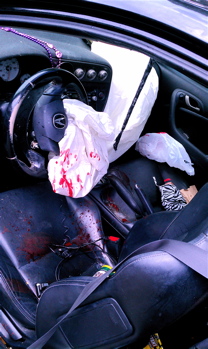 We parked on the shoulder and ran back to the woman’s car where there was a couple other people trying to check on her. A considerable amount of blood was visible inside the vehicle and on the air bags. She was unconscious.

Already two nurses had stopped, followed by a third who brought along his first aid bag. We removed the woman from her car since it appeared to be unstable and she was awkwardly strewn across the seats.

The driver had what appeared to be minor head lacerations, facial bruising and a missing tooth or two, but nothing overtly life threatening.

Maia found the woman’s purse by the side of the road and began picking up trinkets from this person’s life that were scattered across the hillside to the right of the accident.

It was like the inside of her car had been a blender, and all this debris, including the woman, were blended together on high and then the top popped off, pouring the contents across the interstate. 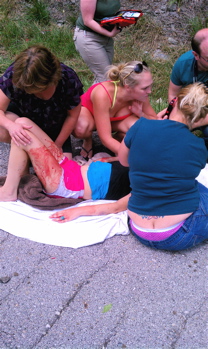 The driver being attended to by off-duty nurses.

Maia found her driver’s license, wallet, and cell phone on the hillside. Her back windshield was up in the trees.

I never could locate her rear passenger-side wheel. It snapped off the axle.

Now concerning the scumbag who was acting like she was helping out and then stole this helpless girl’s money off the floorboard – may there be a special rotisserie in Hell where you will slow roast for eternity.

Several of us had noticed the money, but it was in the car. We were more concerned about finding what had been thrown from the vehicle.

Maia had told this redneck-looking chick who grabbed the cash to just leave it or come put it in the victim’s purse, but the woman said she’d hold onto it and then started backing away from the car, acting like she was talking on her cell phone. Then the woman turned and ran away from the scene towards her own vehicle. 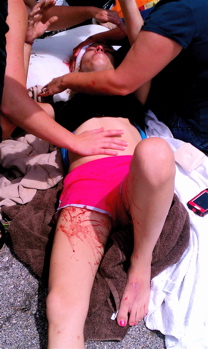 There was too much going on to really run after her, besides we had a baby and the two boys in our car to worry about. Last thing I needed was some meth-head pulling a gun.

It was just a sad display of humanity.

Within 10 minutes of calling 911 the state police were on-scene, followed a few minutes later by fire and rescue.

People don’t appreciate first responders nearly enough. Since 9/11 they have received better recognition, but they still are taken for granted. The men and women who do these jobs put up with a ton of crap, but when your life is being threatened or someone you love is hurt – it can’t be put into words what it feels like to see the police or fire and rescue arrive.

We were doing what we could for this woman but she needed paramedics.

Maia (in black dress to left) speaking with the state troopers after they arrived on-scene.

This accident could have been much worse, but the driver is never going to be the same. You don’t forget flipping a car.

She was probably in her early 20s. Looking at how the accident occurred and the driver’s brief statements, chances are she was texting while driving, and on I-64 that means she was traveling at a minimum of 70 mph.

It’s creepy how fast life can change on you.

My guess would be this woman was a waitress, bartender or stripper. She probably had cashed in her tips from a profitable Saturday evening and was texting someone about meeting up when BOOM! Her car goes ass over end.

Does she possess car or health insurance? Will she still have a job when she gets out of the hospital?

Life will bite you if you’re not careful.

Needless to say this put an unexpected spin on the pool party. It was still a good time. In fact I appreciated it more; the innocence of diving for sunken trinkets and splashing around with kids.

After swimming in the ocean all summer, Jacy, who is 7, came home able to jump in the deep end without any floaties. That was a big advancement for him.

Simple pleasures. They are nothing to be overlooked.

This entry was posted in Events. Bookmark the permalink.