Former Penn State assistant coach Jerry Sandusky being led away to jail after being found guilty.

“WE ARE PENN STATE!”

That sure has lost some of its luster.

I feel for the good people of State College. I have family from that region of Pennsylvania and know the pride everyone there has in Penn State as an academic institution and as a football champion.

It must hurt each time a picture of Jerry Sandusky goes up on the news. There alongside this child predator is the Penn State Nittany Lion emblem.

WE ARE PENN STATE!

I’d retire that chant for a while.

In fact I’d retire the Penn State football program until it can get itself cleaned up and all the administrators can go through the shame of being prosecuted and sued.

The members of the university’s board of trustees need to resign, along with anyone directly associated with the Joe Paterno reign of football at Penn State.

Only then can the healing begin.

The latest chapter in this saga came Thursday, as former FBI director Louis Freeh released the results from his eight-month internal investigation into the Sandusky sexual molestation scandal.

Considering the outcome of the trial and the leaked e-mails between then university president Graham Spanier, vice president Gary Schultz, and athletic director Tim Curley regarding the handling of the Sandusky situation, we all knew this was going to be ugly, but GOD DAMN!

I expect this kind of conduct from criminals, not from university administrators placed in charge of nurturing young people.

I worked as a university police officer, and saw the deceptive practices employed by administrators to massage incident statistics, in order to prevent them from being accurately detailed in promotional materials that would be shown to the parents of prospective students.

All kids are special, but administrators see them as commodities as well. Students seeking a four-year degree at the private institution where I was employed were worth an estimated $169,700 each in tuition alone.

This under-reporting of crimes on our college campuses is a horrible problem throughout the entire higher education system in America. It’s a dirty little secret, and one of the chief reasons it persists is because of a magazine.

The U.S. News and World Report issue that ranks all the colleges and universities across the United States has created a mania among administrators because of the stress they are under to achieve a high-ranking.

Now this isn’t the magazine’s fault, but when you put a number next to a school it changes everything, because it quantifies not just that institution, but in many cases an entire state.

For decades now there has been a massive building boom on college campuses. It’s near impossible to visit any school that doesn’t look like an open construction site.

Climbing up in those rankings takes money. Big money. And big-time college sports are one way to trigger a tsunami of cash.

As Thomas L. Day mentioned in his editorial on Joe Paterno University, “Spanier signed off one construction project after another, remaking Penn State’s University Park campus block by block, to the point that few of the Class of 2003 (my class) could recognize the school they attended a decade ago. In part because of the construction bonanza, tuition more than doubled during Spanier’s tenure. Penn State is now the most expensive state school in the country.”

Penn State is not alone.

It is happening all over.

This drive for money influences normally sane individuals into making curious decisions to protect the reputations of their learning institutions.

These schools are sacred cows — cash cows, and with the high costs associated with maintaining them administrators worry they will not be able to keep enrollments up or ask wealthy alumni for donations if there are headlines of rape and sex abuse occurring on their campuses.

While Jerry Sandusky is a predatory monster, he finally has been caught and will spend the rest of his life in prison.

Anybody want to put an over/under on how long that guy is going to be alive?

Meanwhile justice still waits for the men at Penn State who covered-up his crimes. Their lack of compassion and consideration for Sandusky’s child-victims was callous, reprehensible and criminal.

“In short, nothing was done and Sandusky was allowed to continue with impunity,” the Freeh Group concluded.

What is wrong with these people?!?

There are published reports that Penn State could be facing upwards of $100 million in civil damages and the school might lose its public funding.

The vice president and the athletic director are already under indictment.

Any minute now charges will be filed against Spanier, the former-president.

There also is speculation that current Pennsylvania Governor Tom Corbett, who was the attorney general in 2009 when the Sandusky investigation began, and the State Police Commissioner’s office are both implicated.

Additionally, chatter out of State College is now mentioning the two previous governors, Democrat Ed Rendell and Republican Tom Ridge as possibly having some involvement in this case. 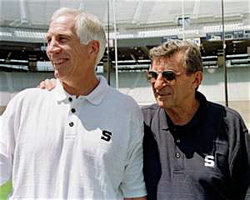 Sandusky and Paterno before the fall.

And if Joe Paterno was alive today he would soon feel the cold steel of bracelets snapping across his wrists, for he too has turned out to be a villain in this tragedy.

“The facts are the facts,” said former FBI director Louis Freeh, “Joe Paterno was an integral part of the act to conceal.”

No doubt Paterno did well by many a young man on his football teams, but it pales in comparison to the shadow cast by his persistent poor decision-making where Sandusky is concerned.

Paterno made multiple conscious decisions to suppress evidence and selfishly protect his reputation, the football team’s and Penn State’s, instead of protecting those amongst the university’s community who were most vulnerable.

“Based on the evidence, the only known, intervening factor between the decision made on February 25, 2001 by Messrs. Spanier, Curley and Schulz to report the incident to the Department of Public Welfare, and then agreeing not to do so on February 27th, was Mr. Paterno’s February 26th conversation with Mr. Curley,” the report states.

Sandusky being removed from the chair to the left, JoePa is seated to the far right.

After the Sandusky scandal deepened, the likeness of this influential assistant coach was removed from a mural on campus that depicts “Inspirational” figures in Penn State history.

It seemed unimaginable a short time ago, but the time has arrived for Joe Paterno to be taken off that wall as well, and his imprint diminished.

It’s a sad time in Happy Valley, and it will get worse before it gets better.