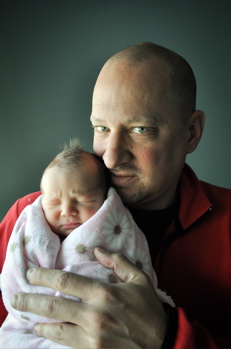 Damn-hell, I have a baby!

I’m a father too…

That is an interesting jacket to slip on. It feels a wee bit snug, but I’m taking to its cut.

Mom and baby are doing fine.

I’m good as well, just taking it all in and trying to make sense of this tiny girl.

Those first few days are quite the ride. It’s one big blur of stress, anxiety, prayer, elation, relief and fatigue.

This all got rolling on April 9th, when Maia started getting regular contractions. The doctor advised we sleep closer to Louisville than Frankfort, in case she went into labor.

We weren’t going to be getting much sleep that night regardless, with our delivery appointment scheduled at Baptist East for 5:30 a.m. the next morning.

We dropped Maia’s boys, Gabriel and Jacy, off at my folk’s house Monday evening, then finished packing before heading to Middletown around 11:00 p.m. to stay at Maia’s sister’s house.

I consciously paused before getting out of bed.

Isabella appears to be concentrating hard on relaxation.

This was going to be a DAY. Before it was over I would have a daughter, be a daddy, and Maia and I would be parents together.

I knew down to the half-hour when the baby would arrive, so once I got up I was on a non-stop, auto-pilot conveyor belt straight through this ride of major life changes – none of which I really ever thought I would be doing.

I was ready for it, just needed that moment to compose myself and detail everything that was going to go down that day. I wanted to be sure I took time to pause and drink in certain moments, because they would be snapshots to last a lifetime.

Then I hopped up to get moving so I could meet my daughter.

We chatted briefly with Gil, and her husband Dennis, who was leaving for Phoenix and San Francisco that morning on business.

Many thanks to them both for loaning out their bed to us!

Entering the delivery area of the hospital for me was akin to hopping on a roller coaster. I took a seat, and felt this bar go down across my arms to make sure I didn’t fall out and then the car begins to slowly climb that first big hill. As the ground gets further away I wondered if this was such a good idea, but there is no stopping the inevitable plunge…

And like a roller coaster, the exhilaration of becoming a father far out-weighed the trepidation.

I got this strange sensation when we checked in. I caught glimpses through doorway windows of baby delivery areas; faint cries of newborns could be heard; I remember thinking how cool it was that this is the spot where tiny new humans are brought into the world.

The prep room was like the green room behind the stage at a performance. Maia switched into her costume, a hospital gown, then all these stage hands, or nurses and anesthesiologists in this instance, came to stick her with needles or affix sensors to her body.

We spent two hours in there cracking bad jokes and nervously talking.

Then a gurney arrived a little before 8:00 a.m., and it was time to take this show on the road.

Peanut is living large in her fleecy blanket.

I wasn’t allowed inside the operating room until after they negotiated the spinal block.

Talk about feeling like you’re in the on-deck circle waiting to bat.

Wait for it, patience…

Such a tiny baby paw.

Let me tell you, those are some long minutes out there pacing back and forth, exchanging pleasantries through masks with the medical staff before I could be by Maia’s side again.

I rocked that look best I could.

I got the “all-clear” wave from the nurse and into the O.R. I went, under the bright lights.

This was a popular place.

She has baby spider monkey toes.

There were two anesthesiologists, our primary doctor, her assistant, two primary nurses, another nurse who was making runs outside the operating room, a post-birth doctor, a nurse-specialist, and two students.

It was a baker’s dozen including the two of us on this stage.

I surveyed the room and Maia was lying there calmly amongst all this commotion, with a curtain midway down her torso, separating her head from the doctors doing their work.

She shot me that easy, reassuring smile I love so much, then I noticed the clear bassinet under a light on the right side of the room. That auto-pilot conveyor belt that began when I hopped up out of bed this morning had delivered me to the precipice of being a parent.

The only thing close to this moment must be death.

I don’t mean that in a dark way, only that the contrast between life transitioning to death is as stark a difference as the one I felt sitting there with Maia, when it was just the two of us one moment, and then suddenly this new life joined us.

I must say I found there was a surprising amount of pulling and tugging involved in a C-section. I looked behind the curtain to see what the doctors were up to and that’s no joke. It was incredible she was able to remain awake through such a procedure, much less carry on a casual conversation.

After a few minutes Maia remarked how she wanted to hear the baby’s cry. That really got me praying. Any number of dark thoughts fleeted through my mind, but I pushed them aside for the positive, and asked for my baby’s deliverance and the safety of her mom.

As my buddy Matt told me, that moment right before your child is born is one of those situations where there are no atheists in foxholes. He was absolutely correct.

Isabella Naomi has entered the building.

Then we heard her beautiful cry and Isabella had arrived.

The doctor sat her down and I quickly counted fingers and toes.

She was healthy and normal.

A few minutes later I was holding my baby, so mom could see her face and touch that soft skin.

This was an excellent distraction from the mild complications Maia encountered, and took our minds off the doctors finishing up their work.

The staff and doctors at Baptist East were amazing! I can’t say enough about them all. They kept everything calm and let us know exactly what was going on, what was next and how mom and baby were doing each step of the way. They were really sweet throughout our entire stay. 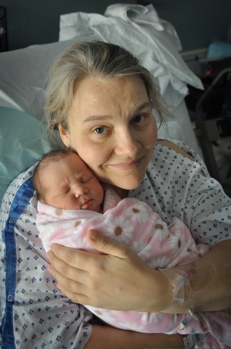 Momma with her new baby girl.

We were in the recovery room for a couple of hours. Maia was hopped up on a variety of drugs. With Baptist East’s policy of Kangaroo Care and skin-on-skin, we had the baby there with us the whole time, in order for mom, dad and baby to make that connection.

I now turned to my cell phone duties. Maia put together group listings to get messages and pictures out to her people, then I had my phone as well.

The nurses took the baby around 10:30 a.m. to get her cleaned up. Isabella’s temperature was a little low, so she needed warming before she could be bathed, and there was a slight wheezing in her breathing.

This all meant she required several extra hours in the nursery before she completely stabilized and could be brought down to us.

The new nursery at Baptist East wasn’t open yet, so a temporary one was set up on the fifth floor. Maia’s room was down on two, so I spent the next four hours running back and forth, checking on Maia, and escorting family members through the maze of hospital floors to see the baby.

The ladies in the nursery were super kind at indulging my numerous requests to bring family in to see Isabella.

She was a gorgeous work of art, with her little nose, head full of hair, tiny hands and spider monkey toes.

Maia was totally out of it the first day from the spinal block drugs, and what they gave her for the side effects. This resulted in some hilarious conversations where she would meld dreams with reality, making absolutely no sense – starting conversations in mid-sentence.

That was quality entertainment.

We stayed in the hospital until Friday afternoon, then packed up our baby girl for the trip home to Frankfort. 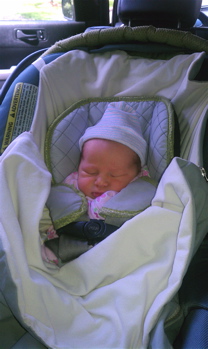 Heading home from the hospital.

I had been thinking about this particular moment for some time. Wondering what it would feel like to walk out of the hospital with an infant – knowing there’s no manual that comes with this little person, nor do they require me to pass a test in order to be a parent.

Hell I have to pass a test just to get a driver’s license, you would think there would be some sort of necessary qualification to raise a human being.

Perhaps it’s my age, and that so many of my friends have had kids and managed not to kill any of them, but I felt confident leaving the hospital. Part too was I know Maia is an amazing mom, and that Isabella has loving brothers, grandparents and relatives waiting to welcome her.

The strange thing was this innate protection instinct that kicked in. I’ve only known this critter a few days, but would step in front of bullets to protect her. 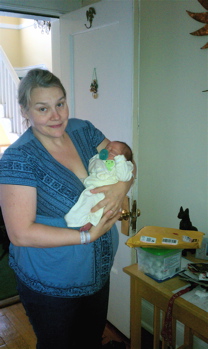 It has now been a couple weeks and we’re doing great. I’ve been told by all my friends how short a period of time it is that babies are this small, so Maia and I are maximizing this first month to bond with Isabella.

Gabriel and Jacy have taken to her immediately and been really great about handling this new addition to the family and the transitional sacrifices involved.

It’s a work in progress for us all. The broken sleep thing ain’t great, but it could be far worse. She’s a stoic child, easy-going, and has a special energy about her.

We take some walks, but mostly we’ve been hanging around the house due to the cool, wet weather. I’m cooking a lot, and that’s pleasant. I must admit having Roku, or on-demand viewing, has been a blessing. The Avengers and X-Men cartoons have been in heavy rotation, along with marathon viewings of Breaking Bad, The Walking Dead and most prominently, The Sons of Anarchy.

Taking some time to nap with her daddy.

We are blessed by her presence.

Thanks again to our families and all our friends for the help and well wishes – it means a lot.

This entry was posted in Events, Family. Bookmark the permalink.