Posted on April 3, 2012 by theurbanllama 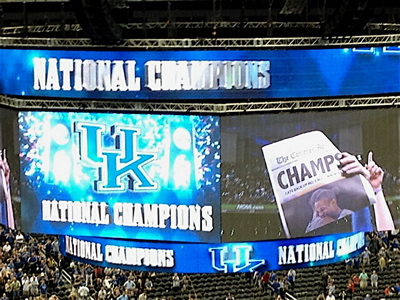 The 2011-2012 NCAA basketball championship belongs to the University of Kentucky Wildcats. Photo by Monty Schoolfield

The Cats did it!

After being ranked number one in the country for 20 of 29 weeks this season, Kentucky put the finishing touches on their dream season before 70,913 at the Superdome in New Orleans, and once again sit atop college basketball.

Kansas stayed in this game and made another of its patented come from behind runs, cutting a lead that had been 18 to five with 1:37 left to go.

Flashes of 2008 began dancing in my head, when Calipari’s Memphis team led Kansas by nine with two minutes to go, then blew the lead and lost in overtime.

It wasn’t going down like that tonight – Kentucky had too much talent. Kansas had the ball with a chance to make it a one possession game and Kentucky blocked a shot, forced a walking call and then a turnover.

The Kitty Cats hit their free throws, and that was the ballgame.

Enough can’t be said about the maturity displayed by these players. There are probably seven NBA ballers on this roster, any of which could have allowed their egos or attitudes to get the best of them, and put themselves before the team, but that didn’t happen.

These Cats played the entire season with a poise and dignity not seen on the college landscape often. 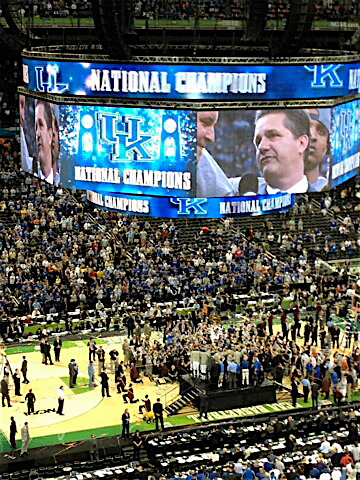 Coach Calipari and his Kentucky players ascend the podium to accept their national championship trophy. Photo by Monty Schoolfield

“This is not about me, this is about these 13 players,” Kentucky coach John Calipari said. “This is about the Big Blue Nation. But I don’t know of any team that has sacrificed for each other like this team and they deserve this moment, they really do.”

Kentucky surged to an 18 point first half lead and Kansas coach, Bill Self was seen visibly shaking his head at courtside.

“They’re good,” Self said. “The kids tried really hard. I’m so proud of them. They represented their school and themselves in such a first-class manner, but tonight they were obviously the better team.”

What could he do?

Michael Kidd-Gilchrist was a beast. After getting knocked to the court on two hard fouls, Kidd-Gilchrist dusted himself off and savaged the Jayhawks with his strength and tenacity.

Freshman Anthony Davis, the NCAA player of the year, was held in check by seven footer Jeff Withey, not scoring a point in the first half, and still Kentucky extended its lead.

Davis took his lunchbox and went to work in other ways, ending up with a box score that read: 6 points; 16 rebounds; 5 assists; and 6 blocked shots.

It earned Davis most outstanding player honors for the tournament.

This young man was barely over 6 feet tall two years ago, before hitting an 8″ growth spurt – and continues to grow. Since he played guard, Davis has an uncanny ability to handle the ball for a player of his size.

But to recognize he wasn’t going to be able to score the ball effectively and then go about doing everything else possible to help his team win is a credit to this young man’s self-awareness.

“It’s not hard to take a backseat, especially when playing with a great group of guys,” Davis said. “I knew I was struggling, so I told them, ‘I’m going to defend and rebound, y’all make the points.’ That’s what they did tonight.”

The party ensues in New Orleans as Kentucky celebrates its victory. Photo by Monty Schoolfield

This also was a night of vindication for Kentucky coach John Calipari. Vindication and validation. His system of utilizing one-and-done players has received criticism from college basketball purists – because it relies on brining in high-level talent that is only staying one or two seasons, must be mature enough to win with inexperience, then start again from scratch the following year.

A system predicated on such youthful talent remains dicey. There is not always going to be a Kidd-Gilchrist who is willing to get up at 6:30 a.m. and demand the other players join him for extra weight lifting sessions and shoot-arounds.

And Davis is a once in a generation-type player.

This kind of talent will get you into the conversation for a national title every year, but one selfish or lazy player could be the difference between playing for a title or like Calipari’s 2009 team, losing in the Elite Eight to a less talented, more experienced squad like West Virginia.

It worked this year.

In reality this game wasn’t even close. Kentucky was up by double digits the majority of the first half and pulling away. Calipari admitted he jerked the reins back on his young thoroughbreds in the second half, even though they were chomping at the bit to be turned loose – and Kansas knew it.

How good were these Cats. They won four tournament games by 12 or more, and the last two by eight.

Nobody could even give Kentucky a ballgame.

In 1996, Maker’s Mark commemorated Kentucky’s sixth national championship by doing a limited run of white-dipped wax bottles with blue denim-screened labels, to show its thanks to coach Rick Pitino and his team of “Untouchables.”

I hope Big Blue Nation will let itself enjoy this title. Calipari was already talking about getting out on the recruiting trail this week, which is great. That is his job. He gets paid to do it. Everyone else should sit back and enjoy what this young team achieved.

That’s something I noticed around this area in the 1996-1998 title runs, people couldn’t just accept the victory.

There is significant pressure on Kentucky to win a national championship every season, and when they finally do fans aren’t always sure how to take it. Of course they’re happy, but there’s this belief that somehow a light is going to shine down on the Kentucky faithful and improve their lives.

That’s what happens when fans attach their self-worth to a team’s achievement.

Those 13 Kentucky players, Coach Calipari and the people actually associated with the Wildcat program – this is their achievement.

Calipari did a masterful job of taking the expectation of excellence and downplaying it, like there was no pressure on him to win this thing and that the tournament and the Final Four were no big deal.

The fatigue in Calipari’s face was evident after the game. He has been like a force-field around his players, absorbing all the scrutiny and anticipation, eating it up and deflecting it away from his youthful charges.

Even in victory he refused to accept much adulation. It wasn’t about him, it was about the team and what they achieved through their hard work, which is exactly what potential recruits love to here.

Tastes so sweet after 16-years.

I imagine he is genuinely happy for finally winning it all, but is just as happy to have it checked off the list of reporters’ questions to always ask of him.

Calipari’s resume is now complete after Monday’s victory. It launders his dirty image, and wipes away the vacated Final Fours at UMass and Memphis.

He has a championship slate to operate from now. I hope he chooses the brand of success found in Lexington, and goes back to doing what he says is his real job – coaching basketball, because the NBA will come calling.

My advice is to not start fretting over early departures and how next season’s recruits stack up. Celebrate this victory. They don’t come around often – 8 championships in 73 years – because it starts over again in seven months.

On a personal level, I’m so pleased I was finally able to open my commemorative bottle of Maker’s Mark. This bottle initially came into my possession while living in Washington, DC, and has since lived with me in Iowa, and New Orleans twice, before coming back home to Kentucky.

This eighth championship, won by eight points, was 14 years in the making, and this drink of whiskey was 16 years coming.