Attempting to find a child’s XL University of Kentucky basketball jersey with the Wildcat’s all-everything star, Anthony Davis’s number on it is no easy task. Factor in the Kitty Cats were playing that Saturday to advance to the Sweet 16, and it took some driving before I could lock one down.

After eventually finding the birthday present I sought at Kentucky Korner, I needed some nourishment, and didn’t feel like venturing into any of the chain restaurants for their cutesy meal deals. I wanted a simple, down and dirty cheeseburger.

Out on the east end of New Circle Road in Lexington is one of a dying breed of old-style hamburger joints known as Burger Shake.

Established in 1957 by Joe Isaac and Dr. Samuel Isaacs, the name is kind of an anomaly. The restaurant owners’ company is I & I, Inc., but after they put up the huge sign above the store announcing “burgers” and “shakes,” the Isaacs had no money left for other signage.

Folks took naming the restaurant into their own hands, and its been known as Burger Shake ever since.

Now this isn’t the best burger ever. The individual patties aren’t particularly thick, but it’s real and authentic.

Burger Shake sticks to what it does well.

Walking through the doors, I turned left where a lighted menu board detailed Burger Shake’s offerings. They have chili dogs, fish and chicken sandwiches, even a grilled cheese, but I wanted a cheeseburger – and a double seemed the way to go.

After placing my order, the person behind the counter relayed it to the cook and that’s when my food was actually prepared. In other words, everything is literally made fresh to order at Burger Shake.

They use a flame broiled system, similar to Burger King, but without the fake flavor additives. The burgers are traditional sized, not huge, but equivalent to what they cost.

My order arrived in a plain brown paper bag with hot grease stains already visible around the bottom. The burgers are dressed with pickles, onions and mustard, and come in little wax paper sacks, that the cheese sticks to on the sides.

I scarfed this bad boy down. The fries are at least equally delicious. They’re reminiscent of McDonald’s in style, but thicker cut and more flavorful.

Instead of a shake I went with a large Mello Yellow, which I hadn’t seen in some time. 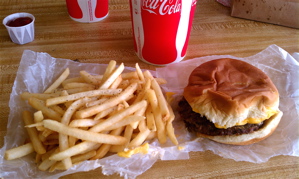 A double cheeseburger and large fries.

At Burger Shake, the nice thing is you always know the price – it’s right there as you pull in. Most of Lexington can mark moments in their lives by the gradual price changes on the big sign above the restaurant.

The current owners, Sharyn Clements and Sammie Lou Lilly, who are the daughters of the original owners, had to adjust the price point in order to remain profitable with bread, meat and transportation all going up in recent years.

This increase hasn’t dampened the restaurant’s dedicated customer base. It’s still a bargain. A family of four can eat here for under $20, but many have a sentimental attachment to Burger Shake that goes deeper than money.

Bring your own atmosphere because there is none inside, but plenty of space to dine-in. Also, bring cash, they do not accept credit or debit cards.

It’s fresh, fast, tasty and cheap – nothing wrong with that these days.

This entry was posted in Food, Reviews and tagged Burger Shake. Bookmark the permalink.