The Turtleman wades through the Capitol

Posted on February 2, 2012 by theurbanllama

Kathy Thurman from my LRC office in the Capitol poses with Ernie "Turtleman" Brown, Jr., with his buddy Neal James.

A war cry was heard throughout the Kentucky General Assembly yesterday as the Turtleman swam through a sea of fans and well-wishers.

Ernie “Turtleman” Brown, Jr., pulled himself out of the murky ponds he usually inhabits around Lebanon, KY, to be recognized with resolutions in both the Senate and House of Representatives for the success of his reality-television show, Call of the Wildman, on the Animal Planet network.

Hitting the airwaves in November 2011, the show follows the adventures of the Turtleman, his faithful canine companion Lolly, and Brown’s friend and right-hand man Neal James, as they travel country roads rescuing animals.

Brown grew up exploring the woods in Washington County, and learning the ways of its occupants. His father and uncle taught him their bare-hands technique for catching snapping turtles, and after he caught a 25 pounder at the age of 7, he’s been in the animal rescue business ever since – going on 40 years.

The Turtleman’s philosophy is simple: “I don’t kill it. I only catch it. Don’t never torture nothing. That’s the name of my game. That’s how you stay into it. Keep people liking you.”

Brown does fill a societal need for the farmers and residents in the rural counties he inhabits. These large snapping turtles are a danger to livestock and small pets, and do need to be removed.

He captures about 300 turtles a year and over 12,000 during his career, managing only to get injured 33 times.

The Turtleman makes a new friend outside the Kentucky House of Representatives.

Self described as “Kentucky’s best-kept secret” and “The poorest famous guy around,” Brown not only does a difficult job, one he usually gets paid for in gas money or livestock, but goes about it with a flair and joy that resonates with the public.

A segment from a 2008 Kentucky Afield episode about The Turtleman has generated 4 million hits on YouTube.

Through his charm, good humor, and sheer love for what he does, the Turtleman has managed to parlay his Internet success into becoming a would be television star and cultural phenomenon, including guest spots on “The Tonight Show with Jay Leno.” Visualize if you can the Turtleman seated next to Eddie Murphy.

Brown cut quite the sporting figure yesterday, standing a solid 6 feet tall, wearing camouflaged fatigue pants, a black leather jacket with fringe, a crocodile-hunter hat with a feather hanging down the back, and a huge leather-sheathed Bowie knife strapped around his waist.

The Turtleman is nothing if not authentic. Brown and his sidekick, Neal James, who brought along his banjo and wore a t-shirt enblazoned with their logo “Snapper-licious,” were a hit with legislators, staff and student groups alike.

Flashing his trademark smile, which features no teeth due to a chainsaw accident, and striking pro-wrestler poses, the Turtleman drew a steady crowd for pictures. He wasn’t hard to find as his trademark “War Woop,” usually reserved for when Brown captures a turtle, echoed through the marble halls of the Capitol.

The Senate was even treated to a lo-country rendition of “My Old Kentucky Home,” as Senator Alice Forgy Kerr did the honors, accompanied by Neal James on banjo.

“I’m kind of like a warrior, like Robin Hood,” said Brown. “I bring a turtle out of this pond, put him in another where he won’t do no violence.” 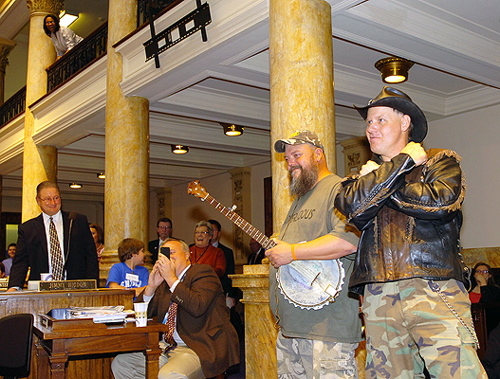 This entry was posted in Events, News and tagged Animal Planet, Call of the Wildman, Ernie Brown, Kentucky, Turtleman. Bookmark the permalink.