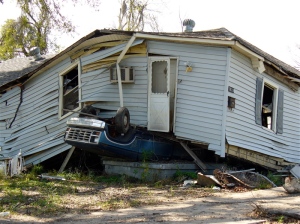 A house comes to rest on an overturned truck once Katrina's flood waters recede, October 2005.

Five years is a long time. That would cover my entire undergraduate college career – from my first Long Island Iced Tea at Eastern Kentucky, to a bourbon-soaked farewell party in Iowa City. That’s a lot of drinking, and also represents a world of change in my growth and development.

Today we again visit that span of time in New Orleans as five years have passed since Hurricane Katrina slammed into the Gulf Coast.

Only a few dates stand out in my memory. A couple birthdays, my wedding, and that fateful day I graduated from college (as it remained in doubt until the final grades were calculated). That’s about it. Yet August 29, 2005, I got that one. It’s a rare and strange occurrence to have a mandatory evacuation order issued upon your city – and to know doom is coming to call ahead of time.

Thankfully Mïa and I weren’t directly harmed by the storm. Our condo was on high ground and we fortunately got out before the worst weather arrived, but it changed us. 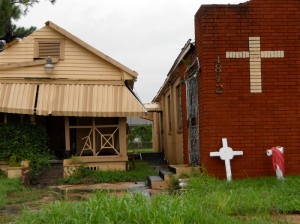 Crosses and memorial next to a still blighted property in the Lower 9th Ward, August 29, 2010.

The damage, pain, death, and in this case, incompetence, remain ever-present. I have no beef with Katrina mind you. Atlantic hurricanes in August are a natural occurrence and can’t be controlled. I’m all good with Mother Nature.

Now the corruption between the business and political communities in Louisiana is another matter. That culture of graft and deceit allowed corners to be cut and sloppy building practices to be tolerated by the Army Corps of Engineers when they installed the original levee system that failed during Katrina.

It’s the same ignorance displayed in the decision making by President George W. Bush when he decided to remain at a fundraiser on the West Coast, and continue his vacation in Texas instead of recognizing New Orleans had become the victim of the most destructive and costliest natural disaster in U.S. history.

A photograph captured this unfortunate moment, as Bush peered out the window of Air Force One, with a childlike wonderment on his face, as it appeared he realized the mistake he’d made. Not sufficiently enough to actually stop and check on the devastation, Bush only flew over New Orleans, electing to remain in the comfort of his climate controlled bubble and continued back to Washington.

Sorry for any inconvenience Mr. President. We don’t mean to cut your vacation short – it’s just we’re underwater and people are dying. We could use a hand or perhaps some leadership.

It’s the criminal lack of planning, oversight and execution seen by Governor Kathleen Blanco and Mayor Ray Nagin. Along with the epically stupid appointment by President Bush of Michael Brown to head FEMA, and as a result, Brown’s tragic handling of the initial federal response to Hurricane Katrina. 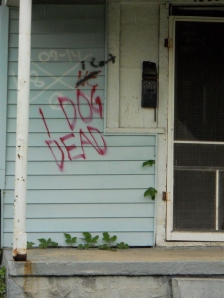 I may not have been stuck in my attic for days waiting for first responders to cut a hole through my roof, nor was I stranded at the convention center for days after the storm with no water – but those stories are all around me.

The anxiety is still palpable. This anniversary would have unearthed raw feelings anyway – it’s a yard marker, a time to reflect and see how far we’ve come, but BP’s oil spill arrived first, highlighting the vulnerability of our way of life along the Gulf Coast.

Our government, which is touted as the best around, failed us.

People can say, “Oh it’s just New Orleans, that place was messed up anyway,” but it wasn’t just New Orleans. The entire system failed at its most crucial moment – and the world witnessed it.

It can’t be explained away. The political establishment hasn’t even tried to justify this collapse because guilty parties exist on every level of government, Democrat and Republican.

It was impossible to miss this breakdown, but nobody wants to talk about it, so the wound continues to fester.

Yes everybody in southern Louisiana and Mississippi are survivors. They are hard working, resourceful, and passionate people, who love their culture and way of life. We put our best face on and took a step forward, but that doesn’t make this failure disappear. 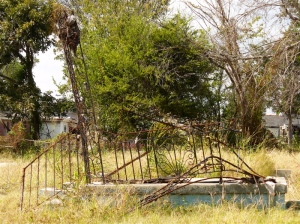 A former home located across from the breached levee in the Lower 9th Ward that was swept away, October 2005.

Many don’t want to question what went wrong. Life is busy these days, and simply surviving is difficult enough in this economy. Besides, those are big doors to open and no one wants to answer that question. It doesn’t fit into a pretty box, and brings to mind how will the next big disaster be handled.

Five years of consideration and I can’t find an explanation for why it took five days for our government to deliver water to the thousands of people stranded at the Ernest N. Morial Convention Center. It’s inconceivable.

They organized food drops within two days of the Indonesian tsunami.

Anyone watching CNN recognized there were thousands of people suffering at the convention center without food or water, yet Brown and Homeland Security Secretary Michael Chertoff claimed ignorance.

Yes it’s complicated politically, and no one likes playing the blame game. Still, a travesty occurred, and all the political double speak, blue ribbon commissions, and bell ringing on anniversary day will not erase this blunder.

It can now be added to the shameful list that includes the theft of the 2000 presidential election, the Iraq War, the housing bubble bust and the ongoing recession.

Interesting how all those items has fingerprints on them from the Bush Administration.

Five years gone. We have a new mayor and police chief. The Saints are world champions. The city looks great, and is filled with a refreshing entrepreneurial spirit. The education system is much improved and there are more restaurants than ever before. 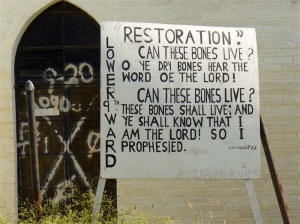 A message of hope outside a flooded church in the Lower 9th Ward, October 2005.

The trend lines are positive, aside from the oil spill. We need to deal with the over 35,000 blighted houses that remain empty, but we’ll be healthy again. It’s just going to take a bit longer.

My most sincere prayers go out to the 1,836 people who died during Katrina and to their families.

I can’t thank enough the Coast Guard and Vice Admiral Thad W. Allen, the National Guard, first responders, the men and women of the U.S. armed forces and Army Lt. Gen. Russell L. Honore, who together rescued the stranded and restored order in New Orleans.

And to the Red Cross who were so kind, along with church, student and community groups from around the country, that continue to assist with gutting and rebuilding houses.

Also to Brad Pitt, and his Make It Right Foundation.

Five years gone and we bow our head in mourning. Here’s hoping in five more we stand proud and celebrate the triumph of a revitalized New Orleans – and a people made whole once again. 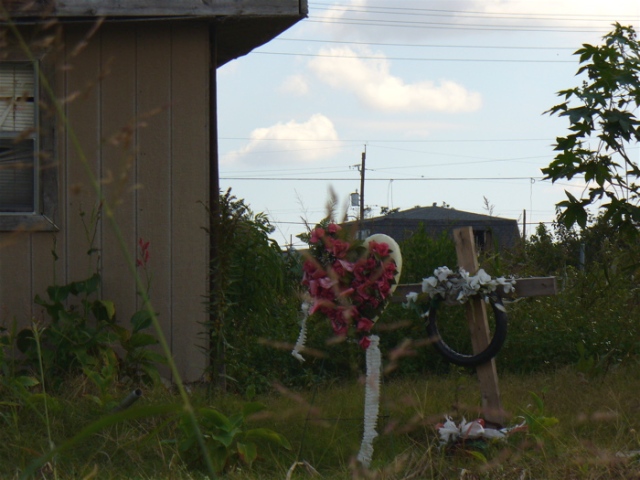 A front yard memorial to a family member lost in the deluge of the Lower 9th Ward, October 2005.

1 Response to KATRINA PLUS FIVE