Posted on February 1, 2009 by theurbanllama 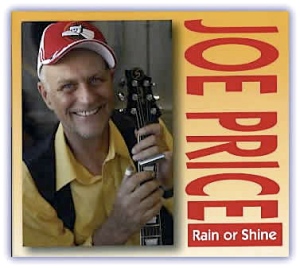 During these long winter months some hot blues can be just the thing to warm the soul. Joe Price is bringing the heat on his new recording, Rain or Shine. Released on Blues Acres Productions, this is the second of three planned independent releases by Price and his wife, Vicki, on their homegrown Iowa record label.

Included are 10 new songs, clocking in at 35 minutes, all written by Price, five of which are blues instrumentals that alternate between the vocal tracks. This spirited recording finds Price in a rollicking mood. Equipped with his National ResoRocket guitar, Price rips into stories about wandering women and love lost. The opening track, “Hornet’s Nest,” sets the tone for the disc. This old fashioned rave up gets the floorboards rattling with furious guitar picking and boot stomping splendor.

Rain or Shine is essentially a solo recording, just Price and his guitar for the most part. In a similar style to Elmore James or John Lee Hooker, this is stripped down to the frame. Price’s raspy call is well steeped in the blues and capable of telling a story by itself. Hook it up with some beat box slide guitar and this is vintage blues.

Along with “Hornet’s Nest,” another cut destined for summer outdoor concerts is “Beer Tent Boogie Woogie.” Echoing the lament of many music festival attendees, Price sings, “I got too drunk to drive.” He evens out his troubles with a little “roley, smokey” in the parking lot.

Price does have some friends join him on a couple tracks. Vicki adds just the right accent to the chorus on the rowdy “Steel Guitar.” And on the disc’s final song, “Rock Slide,” Keni Ewing plays drums and Al Naylor, from the Bob Door Blue Band, brings a big trumpet to the conversation and hollers back at Price’s guitar.

This disc was recorded live in the studio at Wow & Flutter in Nashville and at Catamount Studios in Cedar Falls, Iowa. In keeping with Price’s authentic style Rain or Shine has a raw mix to it that includes some distortion. There’s a lag at the beginning and end of each song where tape is rolling and studio noise is audible. Even a train can be heard going by the Nashville studio at the end of “Beer Tent Boogie Woogie.” This doesn’t detract from the recording, it’s more of a style decision and personalizes each song. Besides the train whistle is well placed.

Overall Rain or Shine is a thoroughly enjoyable listen. It’s like being at a house party where Joe Price is the center of attention and everybody is sweating up the monster groove. On a snowy winter day it takes a little bit of the chill out of the air.