Posted on February 19, 2008 by theurbanllama 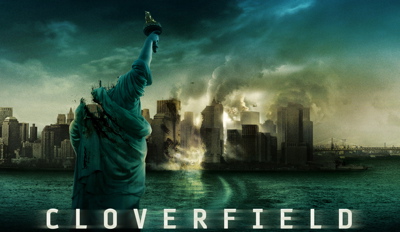 Whoa New York just got messed up!  I thought Manhattan was still in a post-9/11 moratorium from Hollywood monsters, but don’t tell that to Lady Liberty.  Her head was last scene bouncing down a Soho street.

After an impressive amount of hype Paramount Pictures has finally unleashed Cloverfield upon the general public.  The movie itself is a classic monster flick.  From out of a calm New York night an insidious creature attacks the city, dining indiscriminately upon her glitterati.  That part is straightforward enough.  The real buzz with Cloverfield has to do with how it was shot and the build up prior to its release.

The story centers upon five New York hipsters who are throwing a going away party for their friend Rob, played by Michael Stahl-David.  The film opens with the statement that case designate “Cloverfield” has been seen multiple times, referring to our protagonist – the Monster, and that the following video was recovered at incident site U.S. 447, formerly known as “Central Park.”

The hook for this film is it’s shot from the perspective of a hand-held video camera.  Absolutely reminiscent of The Blair Witch Project, and presents the movie as if looking through a camera’s viewfinder.  This includes every shake, shock and bump.  Note to self: tacos and beer NOT the best combo before seeing Cloverfield.

During the going away party, a strong tremor is felt throughout Manhattan and soon after the Monster makes his appearance.  Cue fly-by of Statue of Liberty’s head, a referential nod to John Carpenter’s 1981 film Escape from New York.

The pacing and outcome of this film are never in doubt.  The other cast members are T.J. Miller, Jessica Lucas, Odette Yustman, Lizzy Caplan and Mike Vogel.  You’re not supposed to know who any of these people are so don’t ask.  This way they can be killed off at strategic moments when the movie drags.

More intriguing than the movie itself is the viral marketing campaign Paramount Pictures carried out prior to the release of Cloverfield.  The first promos were seen before the Transformers movie in July 2007.  No title was attached only a date, 01-18-08, which was Cloverfield’s release date.  The Web site (www.1-18-08) was built around this date and offered time-stamped photos as clues to the film.  Then other sites popped up.  One for Tagruato (www.tagruato.jp), a Japanese deep sea drilling company and another for a Japanese happy drink, Slusho! (www.slusho.jp).

It was learned on Tagruato’s Web site that one of its fictitious drilling platforms had been destroyed off the coast of Connecticut.  A statement from the company’s president confirmed this and canned news footage of the platform disaster became available.

Slusho! turned out to be a registered product of Tagruato, which led people to the parent company site.  Those who signed up for Slusho! information received fictional sonar readings as the Monster made its way to NYC for Cloverfield’s opening weekend.

This campaign was the brainchild of producer J.J. Abrams, writer Drew Goddard and director Matt Reeves.  Abrams, who wrote the Armageddon screenplay, is a writer and producer, along with Goddard, on the television shows Lost and Alias.  These two utilized a similar viral campaign to hype the third season of Lost.

As a side tidbit, Slusho! was a featured beverage on Alias, which tipped many off to part of this campaign.  Also included in the Cloverfield experiment were MySpace pages for each of the actors, with final updates ending on 01-18-08.  They even went to the trouble of editing Hud’s site, played by Miller, to reflect his change it height to 2’6” after evidently being bitten in half.

Prior to Cloverfield a similar campaign was used to great success in building buzz for the opening of The Blair Which Project.  Also, the woeful Snakes On A Plane tried this technique but nothing could keep that film airborne.

The build up to this film proved extremely effective in creating a sense of depth behind the screenplay and its characters.  Unfortunately Cloverfield has trouble surviving the hype.  When the screen finally goes blank and the first credits roll a collective sigh of disappointment is uttered by all in the theater.  The film’s only 85 minutes but feels longer.